'When the federal government abdicates its role in protecting our nation’s borders…states should have authority to protect their citizens,’ said Representative Bill Posey

Florida Congressman Bill Posey has introduced a proposal that would give states the right to ask the Secretary of homeland security to enforce the Immigration and Nationality Act.

With Florida Attorney General Ashley Moody, the Republican lawmaker introduced his House Resolution 7413 on April 6, nearly a week after the Biden Administration announced plans to end Title 42 in May.

The public health regulation was introduced at the start of the COVID-19 pandemic under President Donald Trump to prevent the spread of the virus. Maintained by President Joe Biden, the policy permits U.S. border agents to expel illegal immigrants from the country, including those intending to claim asylum.

“Maintaining operational control over our nation’s borders is critical to our security and our ability to stop human traffickers, drug smugglers and other violent criminals and terrorists who mean to do our communities harm,” Posey said in a statement. “When the federal government abdicates its role in protecting our nation’s borders and refuses to enforce immigration laws allowing millions of people to illegally cross into our country, states should have authority to protect their citizens.”

Posey’s bill, known as the Immigration and Enforcement Partnership Act of 2022, would require the head of the Department of Homeland Security to enforce federal immigration law.

“If a State attorney general finds that the Secretary of Homeland Security is not adequately fulfilling his non-discretionary duties under title II of the Immigration and Nationality Act … such as the arrest, detention, and removal of criminal aliens and arriving aliens, such officer may request in writing that the Secretary do so,” per the legislation.

Following a request from an attorney general, the DHS secretary would have 30 days to “ensure that any such duties are adequately fulfilled by officers and employees of the Department of Homeland Security” or to deputize state officials to enforce federal immigration regulations.

This could include the investigation, apprehension, or detention of illegal immigrants within the state.

Should the DHS secretary fail or refuse to comply, the bill permits the state’s attorney general to file a civil action in the relevant U.S. district court to seek to legally enforce the law.

“The court shall advance on the docket and expedite the disposition of a civil action filed under this subsection to the greatest extent practicable,” states the bill.

Both Moody and Posey regard the measure as necessary to prevent an increase in illegal activity at the southern border, including crossing and drug trafficking.

“In less than a year and a half, the Biden administration has obliterated our southwest border and it’s about to get even worse as the president prepares to end Title 42,” Moody said. “We can no longer trust this administration to enforce the law. It is time for swift action to protect the American people. That is why, Representative Posey and I are taking this matter to Congress and asking the legislative branch to let the states protect our citizens by enforcing public-safety immigration laws when Biden won’t.”

In an April 7 statement, the congressman’s office said:

“U.S. Customs and Border Protection encounters with illegal migrants at the southwest border totaled more than 2 million since February 2021, with deportations down 70% last year. Attorney General Moody and Congressman Posey are concerned that the federal government’s seeming disinterest with enforcing immigration laws will exacerbate the opioid crisis and leave the door open for unmitigated drug and human trafficking.”

“Illegal immigration costs the taxpayers of Florida more than $100 million a year. The cost to public safety is harder to calculate as the nation struggles with a deadly opioid crisis claiming 21 lives a day in Florida. The crisis is being exacerbated by fentanyl, a synthetic opioid 100 times stronger than morphine. “

HR 7413 has been referred to House Committee on the Judiciary for further review. 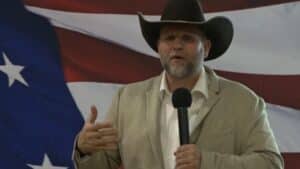