A federal judge has blocked enforcement of parts of a Florida law that would impact how the state’s public universities conduct education.

The law amends an existing statue and seeks to “prevent discriminatory instruction in the workplace and in public schools and defines individual freedoms based on the fundamental truth that all individuals are equal before the law and have inalienable rights,” according to a statement from DeSantis after signing the legislation.

Opponents viewed the language as overly broad and argued that it encroached upon the First Amendment rights of educators.

After HB7 was enacted, Novoa reviewed course material and found that certain readings and topics would need to be removed to comply with the new law. Lessons on Jackie Robinson and past segregation in baseball, as well as books about violent revolutions in Latin America, were among the materials that would need to be excluded.

The law could cost Novoa’s university roughly $73 million in annual funding if “appropriate” punishments are not levied against professors deemed to be noncompliant with the statute, according to FIRE, the organization who brought the lawsuit.

“In this case, the State of Florida lays the cornerstone of its own Ministry of Truth under the guise of the Individual Freedom Act, declaring which viewpoints shall be orthodox and which shall be verboten in its university classrooms,” Judge Walker wrote in his 139-page decision.

“One thing is crystal clear—both robust intellectual inquiry and democracy require light to thrive. Our professors are critical to a healthy democracy, and the State of Florida’s decision to choose which viewpoints are worthy of illumination and which must remain in the shadows has implications for us all,” he added. “If our ‘priests of democracy’ are not allowed to shed light on challenging ideas, then democracy will die in darkness.”

The Florida Governor’s Office intends to appeal the ruling. 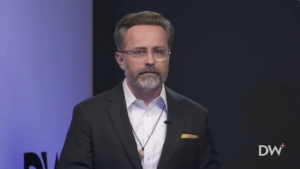