Florida Gov. Ron DeSantis has announced that his state is suing the Biden administration over their vaccine mandate for federal contractors.

The administration has issued an order requiring federal contractors to be vaccinated by Dec. 8.

The lawsuit was filed by Florida Attorney General Ashley Moody and seeks an injunction barring the mandate from going into effect.

DeSantis announced the lawsuit during a press conference on Thursday.

“We also cannot have the federal government coming in exceeding their power,” DeSantis said at a press conference. “Some of the stuff that they’re doing with it … rewriting contracts and they’re transforming normal contracting into basically public health policy, and that’s not anything Congress has ever authorized and so that’s a huge problem.”

BREAKING: @GovRonDeSantis announces that the State of Florida is filing a lawsuit against the Biden Administration to challenge their unconstitutional federal contractor vaccine mandate. pic.twitter.com/7CE0LYBCA4

“We do have a responsibility to stand up for our authority here to govern ourselves, and also make sure that this constitutional system of ours isn’t out of whack,” DeSantis said.

“The main course of business will be: Make sure people are able to keep their jobs. We are not going to deny people the ability to earn a living based on their decisions about an injection,” DeSantis said. “These people have been working the whole doggone time, and then now all of a sudden they’re going to get kicked to the curb? Give me a break.”

DeSantis has called for legislation to protect Floridian workers when legislators hold a special session in November. 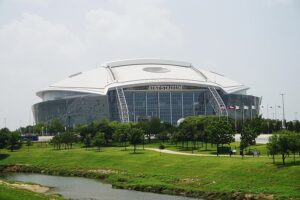 NAACP Tells Free Agents To Sign With Teams Outside of Texas