A Florida emergency room physician has been ousted from the Capital Regional Medical Center (CRMC) in Tallahassee after getting busted selling mask exemptions to parents for $50.

Ten school districts in the state, including Leon County, are defying Governor Ron DeSantis’ ban on mask mandates and forcing children to wear them unless they have a letter from a doctor.

Dr. Brian Warden posted in a Facebook group titled “Parents Against Masks” urging Leon County parents to contact him if they wanted a medical exemption for their child. In a subsequent post, he said that the letter would be on signed stationery and cost $50, according to a report from the Tallahassee Democrat. 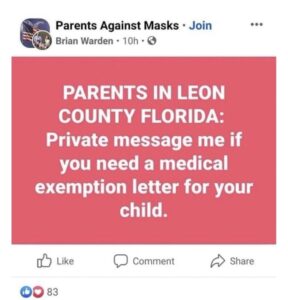 In another post, Warden wrote that the social media platform may be “thinking I am getting scammed or something” because he was not receiving messages. He also noted that he was not selling the letters in affiliation with any hospital or medical group that he works with.

“Comment here if you live in Florida and didn’t get a response from me,” he wrote. “I’ll reach out to you.”

The posts were quickly screenshotted and spread across the internet like wild fire. Some social media commentators called for him to be fired and reported to the Florida Board of Medicine, while others celebrated a doctor willing to help parents get around the school mandates — even if it came at a price.

Florida Department of Health records indicate that Warden was issued his medical license there in February.

Warden moved from Philadelphia to Tallahassee with his family to work for a group that contracts with CRMC, but he also formed a limited liability company called Dove Field Health in July.

The hospital says that they cut ties as soon as they heard about the sales.

“We act with absolute integrity in all that we do, and it is our expectation that providers behave in a way that is consistent with those values,” CRMC spokeswoman Rachel Stiles told the paper. “Immediately upon learning of this physician’s actions, we began the process of removing him from providing services to our hospital patients.”

The Tallahassee Democrat reports that “about 3,000 opt-out forms, mostly parental opt-outs for older students, were turned in as of Tuesday night. It is unclear how many medical opt-out forms have been returned. Those forms are due Friday. Leon serves around 34,000 students. Some 337 students self-reported having COVID-19 and about 1,000 were quarantined.” 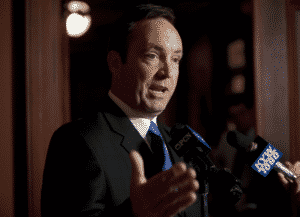