'Who Needs Serious Agents To Know What They’re Doing Or Not Doing? The Billionaires, The Multi-Multi-Millionaires'

The event was a breakfast hosted by Al Sharpton’s National Action Network.

Biden’s comments follow the newly elected House Republicans’ efforts to do away with a reported 87,000 new IRS auditors along with a looming Jan. 19 debt ceiling deadline.

“They’re going to talk about big spending Democrats again. Guess what? I reduced the deficit last year $350 billion,” Biden said, appearing to reference the debt ceiling. “And this year, the federal deficit is down $1 trillion-plus. Hear me, that’s a fact.”

“There’s gonna be hundreds of billions reduced over the next decade, but so what?” he said. “These guys are the fiscally — well, they’re fiscally demented, I think. They don’t quite get it.”

“You know, all these new IRS agents we have is because they fired a lot of them and a lot are retiring,” he continued. “And guess what? Who needs serious agents to know what they’re doing or not doing? The billionaires, the multi-multi-millionaires,” Biden said.

“And according to the nonpartisan Congressional Budget Office, this one bill alone will add $114 billion to the deficit.”

The national debt was just under $28 trillion when Biden took office and sits at $31.49 trillion today, according to the Congressional Research Service.

“I am writing to inform you that beginning on Thursday, January 19, 2023, the outstanding debt of the United States is projected to reach the statutory limit,” wrote the Treasury Secretary. “Once the limit is reached, Treasury will need to start taking certain extraordinary measures to prevent the United States from defaulting on its obligations.”

“Failure to meet the government’s obligations would cause irreparable harm to the U.S. economy, the livelihoods of all Americans, and global financial stability,” wrote Yellen.

“Increasing or suspending the debt limit does not authorize new spending commitments or cost taxpayers money,” she continued. “It simply allows the government to finance existing legal obligations that Congresses and Presidents of both parties have made in the past.”

Yellen warned “extraordinary measures” may last an indefinite period of time, citing “a variety of factors, including the challenges of forecasting the payments and receipts of the U.S. government months into the future.”

“I respectfully urge Congress to act promptly to protect the full faith and credit of the United States,” the letter concluded.

Prior to Congress’ last debt ceiling increase, Yellen warned of Americans could be “strapped for cash” in an article shared by the Wall Street Journal in September that year. 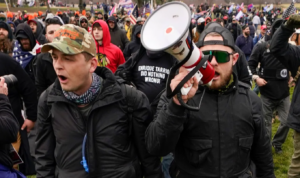 A Reporter at Large

The Five Proud Boys Accused of Planning Jan. 6 Go to Trial In DC