Finland 'Must Apply For NATO Membership Without Delay,' Say President and Prime Minister

The Kremlin said the expansion of NATO would warrant 'retaliatory steps'

Finland will move forward with its application to join NATO following weeks of speculation.

In a joint statement, the nation’s President Sauli Niinistö and Prime Minister Sanna Marin announced their interest in and intent to join the military alliance.

“Time has been needed to let Parliament and the whole society establish their stands on the matter. Time has been needed for close international contacts with NATO and its member countries, as well as with Sweden,” the leaders said on May 12. “We have wanted to give the discussion the space it required.”

Niinistö and Marin believe joining NATO would increase their country’s national security and would strengthen the alliance in turn.

“Finland must apply for NATO membership without delay,” Niinistö and Marin concluded. “We hope that the national steps still needed to make this decision will be taken rapidly within the next few days.”

If Finland is accepted, NATO would double its borders with Russia. The Finnish-Russian border spans roughly 800 miles.

Russia’s Foreign Ministry has called the expansion of NATO a threat to its security. Through a spokesman, the ministry said it would be obligated to “retaliatory steps, both of a military-technical and other nature, in order to stop threats to its national security arising.”

“Finland joined the unfriendly steps taken by the European Union towards our country. This cannot fail to arouse our regret, and is a reason for corresponding symmetrical responses on our side,” Dmitry Peskov, a spokesman for the Kremlin, told reporters on May 12.

“NATO expansion does not make our continent more stable and secure,” Peskov said.

Russian President Vladimir has explicitly asked President Biden to affirm Ukraine would not be admitted into NATO during talks in December. Ukraine has sought to join the alliance since the early 2000s.

Biden did not agree to the condition, according to comments made by national security adviser Jake Sullivan.

Sullivan told reporters at the time that the president “stands by the proposition that countries should be able to freely choose who they associate with,” per CNBC.

Finland is expected to be readily accepted into NATO.

“Finland’s NATO-compatible military has a wartime strength of 280,000 and 900,000 reservists, in addition to some of the most sophisticated intelligence and cyber capabilities in Europe,” reports Axios.

NATO Secretary-General Jens Stoltenberg told Newsweek that she “welcomed” the announcement from the Finnish president and prime minister.

“This is a sovereign decision by Finland, which NATO fully respects,” Stoltenberg said via email. “Should Finland decide to apply, they would be warmly welcomed into NATO, and the accession process would be smooth and swift.”

Sweden is also considering joining NATO and is expected to announce its decision this weekend. Both Sweden and Finland had maintained close partnerships with the military alliance although they had never formally been members of the bloc. 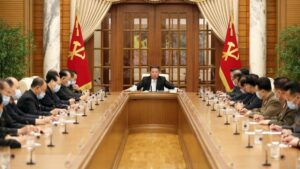