The President will address the nation on Mar. 1

Capitol Police reinstalled fencing around the United States Capitol in anticipation of President Joe Biden’s State of the Union address.

Police Chief Tom Manger announced on Feb. 27 that the inner perimeter fence would  “protect the United States Congress, the Capitol, and the legislative process.”

“In light of the upcoming State of the Union Address, and the possibility of demonstrations in the next couple of weeks, we have been working closely with our federal, state and local law enforcement partners on a security plan to prevent any disruption to the important work of Congress,” Manger said.

“Out of an abundance of caution, and in conjunction with the United States Secret Service,” he added, “a plan has been approved to put up the inner-perimeter fence around the Capitol building for the State of the Union Address.”

The Defense Department has agreed to deploy 400 troops to Washington D.C. this week to help with traffic control and aid the police. The D.C. Metropolitan Police Department and the U.S. Capitol Police made a joint request for additional support in light of the address and the anti-mandate trucker convoy scheduled to reach the city on March 5.

Organizers of The People’s Convoy, the American rendition of the Freedom Convoy 2022, have said the demonstration is a “100% safe, lawful and peaceful” journey and that it will “terminate in the vicinity of the DC area, but will NOT be going into DC proper.”

Defense Secretary Lloyd Austin approved the request last week. The troops will be unarmed and will not take part in law enforcement or carry out domestic surveillance.

“The people who live, work and visit the District are part of our community, and their safety is our first mission priority” Maj. Gen. Sherrie L. McCandless, D.C. National Guard commanding general, said in a statement.

So far, 50 tactical vehicles have been stationed at the traffic post in DC and will stay in position for 24 hours a day until March 7.

“Our efforts include enhanced intelligence sharing, a Critical Incident Response Plan for the US Capitol, a regional security assessment, and a simulation experiment that developed data-driven recommendations to bolster regional security,” Psaki said. “So, we are closely monitoring, closely watching, and working with state and local authorities.”

Biden is set to address the nation on March 1. Several roads will be closed at 5:30, which the Capitol Police say is “not related to the potential truck and vehicle convoys,” per NBC News.

In addition to the National Guardsmen and the fence, the government has warned DC residents to expect heavy traffic this weekend. 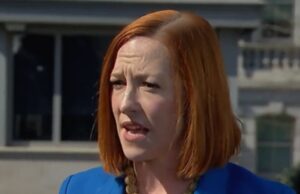 Jen Psaki Says Admin Opposes ‘No-Fly Zone’ in Ukraine, ‘Not Going to Have a Military War with Russia’