A federal judge has temporarily halted Kentucky’s new abortion law, which would have allegedly forced the two abortion clinics in the state out of business.

Planned Parenthood had asked the court to intervene and stop the law from going into effect.

“If Plaintiff cannot comply with HB3 and must cease providing certain medical services until the Cabinet promulgates a means of compliance, then this disruption to medical services will no doubt interrupt the continuity of care for Plaintiff’s patients,” Judge Jennings wrote. “As a result, a temporary restraining order serves public policy.”

Judge Jennings added that the law, as it is currently written, likely violates the Supreme Court decision in Roe v. Wade which legalizes abortion federally until fetal viability.

The legislation was framed as an emergency measure so that it would go into effect immediately. According to Planned Parenthood, neither of the abortion clinics in the state would be able to comply with the new laws as the rules are unclear.

“The new law bans abortions after 15 weeks of pregnancy and requires women to be examined by a doctor before receiving abortion pills. It also contains new reporting requirements that the Kentucky clinics said they couldn’t immediately comply with. Noncompliance can result in stiff fines and felony penalties,” NPR reported. “Jennings’ order did not delve into the larger issue of the new law’s constitutionality. Instead, it focused on the clinics’ claims that they’re unable to comply with the measure because the state hasn’t yet set up clear guidelines.”

Judge Jennings’ order is set to expire in two weeks unless new information is provided. A hearing is expected to take place before then.

As Timcast previously reported, the bill was originally vetoed by Democrat Governor Andy Beshear, but the Republican-majority Kentucky legislature voted to override his decision last week.

Planned Parenthood said that they were immediately resuming abortions following the ruling.

“This is a win, but it is only the first step,” said Rebecca Gibron, the CEO for Planned Parenthood in Kentucky, in a statement to NPR. “We’re prepared to fight for our patients’ right to basic health in court and to continue doing everything in our power in ensure abortion access is permanently secured in Kentucky.” 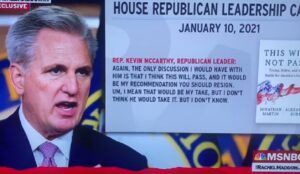