The override means both bills will go into effect immediately

One bill would ban almost all abortions after 15-weeks of pregnancy. The other would ban transgender women from competing in female sporting events.

The first, House Bill 3, is framed as an emergency measure that will take immediate effect. As a result, this will essentially close the two abortions clinics currently operating in the state. According to a report by the Wall Street Journal, the action leaves both clinics unable to comply with the new laws.

The bill enacts a ban on most abortions after 15 weeks of pregnancy, restricts access to medication abortion, and makes it more difficult for a minor to obtain an abortion.

According to the bill, mifepristone can’t be prescribed to a person without obtaining their “informed consent” at least 24 hours prior, including signing a document “created by the cabinet.”

The proposed legislation does not include exceptions for cases of rape or incest.

On Friday, Governor Beshear vetoed the bill. He said that the legislation is “likely unconstitutional” in his veto letter signed Friday.”

“Rape and incest are violent crimes,” said Beshear. “Victims of these crimes should have options, not be further scarred through a process that exposes them to more harm from their rapists or that treats them like offenders themselves.”

The governor noted that the bill would make it more difficult for girls under 18 to access abortion without notifying both parents. For example, Beshear said that a girl impregnated by her father would have to inform him of her intent to get an abortion, according to House Bill 3.

Opponents of the Kentucky bill say its conditions are so demanding that no abortion clinic could comply.

“House Bill 3 has nothing to do with improving patient safety; it’s just another way for extreme Kentucky politicians to push their political agenda at the expense of their constituents’ lives,” said Samuel Crankshaw, communications manager for the American Civil Liberties Union of Kentucky.

The state Republican Party criticized Beshear for the veto. GOP spokesperson Sean Southard said Beshear’s veto was “the latest action in his ideological war on the conservative values held by Kentuckians.”

Kentucky is not the only state pushing for more strict abortion laws. Texas and Idaho recently passed controversial legislation that allows private citizens to sue anyone who performs, aids, or abets an abortion in the circumstances outlined in legislation. Both Texas and Idaho laws prohibit abortions after six weeks of pregnancy.

Beshear also vetoed the Fairness in Womens’ Sports Act, saying that it “most likely violates” the U.S. Constitution and that there was no need for such a ban in the state.

Senate Bill 83 mandates schools to designate all athletic teams, activities, and sports for students in grades six through twelve as “Boys,” “Coed,” or “Girls.”

However, on Wednesday evening, the state’s legislature voted overwhelmingly to bypass the governor and enact the ban.

Kentucky is the second state to enact such a ban as a result of lawmakers’ overriding of a veto. Utah recently experienced a similar turn of events.

The inclusion of transgender athletes, particularly women and girls, has become a political flashpoint this year, highlighted by the story of swimmer Lia Thomas.

In January, the NCAA changed its policy on transgender athletes. According to Sports Illustrated, the new approach to allowing transgender athletes will follow a sport-by-sport model similarly adopted by the U.S. and international Olympic committees.

“We are steadfast in our support of transgender student-athletes and the fostering of fairness across college sports,” said John DeGioia, Georgetown University’s president and the NCAA board chairman.

According to the report, the Board of Governors voted to pass the new policy as it “preserves the opportunity for transgender student-athletes while balancing fairness, inclusion, and safety for all who compete.”

Like other bills of its kind, the Kentucky legislature’s Fairness in Womens’ Sports Act has drawn both praise and criticism.

Fairness Campaign Executive Director Chris Hartman blasted the bill as “bullying,” as he says there is only one openly transgender student athlete in the state.

“I applaud Governor Beshear for doing the right thing today and vetoing a harmful piece of legislation that would deprive transgender girls and young women of the opportunity to grow and learn from being on a team, simply because of who they are,” said Hartman. “From the start, this bill has been more about fear than fairness.”

“Kentuckians overwhelmingly support this commonsense bill, but unfortunately, Gov. Beshear chose to side with his woke political base instead of Kentucky’s female athletes. Biology matters, especially in sports, and we look forward to the General Assembly overriding Beshear’s tone-deaf veto so that women’s sports in Kentucky can be protected,” Walls said in a statement.

Cassandra Fairbanks contributed to this report. 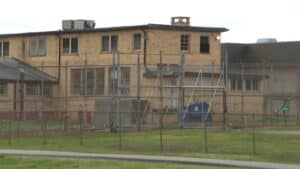