Federal Judge Awards Over $240,000 to the Parents of Otto Warmbier

A federal judge has ruled $240,300 seized from a North Korean bank account will be given to the parents of Otto Warmbier, the American student imprisoned by North Korea in 2016 who died as a result of injuries sustained while incarcerated.

Warmbier was a 21-year-old student at the University of Virginia, who wanted to see the repressive nation of North Korea before starting a career in the finance industry. The Ohio-native found Young Pioneers, a travel company that specialized in trips to geopolitical hotspots. He left for the trip just after Christmas in 2015.

Warmbier was ultimately accused and arrested for allegedly stealing a hotel sign.

He was convicted after a one-hour trial in March and sentenced to 15 years of hard labor.

After 17 months of imprisonment, Warmbier was flown back to the United States in a coma.

His parents told ABC News that he was deaf, blind, jerked violently, and made “inhumane sounds.”

“Otto had a shaved head. He had a feeding tube coming out of his nose,” Fred Warmbier, Otto’s father, recalled. “He was staring blankly into space, jerking violently. He was blind. He was deaf. As we looked at him and tried to comfort him, it looked like someone had taken a pair of pliers and rearranged his bottom teeth. Within two days of Otto being home, his fever spiked to 104 degrees. He had a large scar on his right foot.”

North Korean officials have denied mistreating the college student. The nation claim he contracted botulism while in prison but American doctors never found proof of this.

According to Fox News, North Korea “ has called itself the ‘biggest victim’ in his death while accusing Washington and Seoul of orchestrating a smear campaign.”

Warmbier died on June 19, 2017, just six days after he was evacuated from North Korea.

The latest sum is a partial payment toward that total and was ordered by a federal judge in New York. The money was seized on the grounds that it could be used for terrorism.

The total amount paid to the Warmbiers to date is not publicly known. 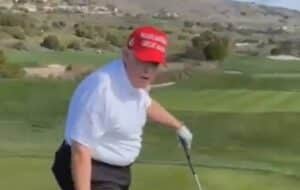 WATCH: Trump Caught on Film Saying He Will Be the '45th and 47th President'