WATCH: Trump Caught on Film Saying He Will Be the '45th and 47th President'

Former President Donald Trump was caught on camera telling his golf buddies that he will be the “45th and 47th president.”

Trump has not formally announced his candidacy, though he has been dropping hints for quite some time.

The new video features Trump wearing one of his signature “Make America Great Again” hats while preparing to tee off.

“First on the tee, the 45th president of the United States,” one of his friends says, prompting Trump to reply “45th and 47th.”

Trump ally Sebastian Gorka tweeted out the video with the caption, “Yes, President Trump is running!”

Trump has been teasing a 2024 campaign and dropping hints at his rallies — which seem an awful lot like campaign events.

If he does run, Trump is likely to easily take the Republican Party nomination.

The report continued on to note that “should Trump forgo another campaign for the White House, however, DeSantis would supplant him as the frontrunner. The Florida governor scores 30 percent support in a field that doesn’t include Trump, while Pence takes second place at 24 percent.” 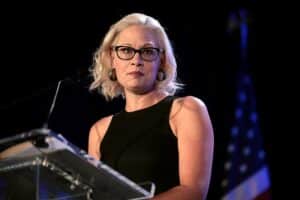 Kyrsten Sinema More Popular With Republicans Than Democrats in Arizona, According to New Poll