During a press conference on Wednesday, Chairman of the Federal Reserve Jerome Powell said that inflation could be “higher and more persistent” than expected and that “very generous unemployment benefits” were one of the main reasons people were not working.

“As the reopening continues, bottlenecks, hiring difficulties, and other constraints could continue to limit how quickly supply can adjust, raising the possibility that inflation could turn out to be higher and more persistent than we expected,” Powell said. “Our new framework for monetary policy emphasizes the importance of having well-anchored inflation expectations, both to foster price stability and to enhance our ability to promote our broad-based and inclusive maximum employment goal.”

When asked by Fox News Business’s Edward Lawrence what the cause was of the “9.5 million people unemployed as of the last labor market survey and 9.2 million job openings,” Powell said it was a “really unusual situation to have the ratio of vacancies to unemployed be this high” and one of the main causes is “very generous unemployment benefits.”

After the passage of Biden’s $1.9 trillion American Rescue Plan — which included increased unemployment benefits and extended the duration benefits would be offered — the economy added back nearly 750,000 fewer jobs than expected.

Forbes reported, “The United States added 266,000 jobs in April, according to data released by the Labor Department Friday — much worse than the 1 million job gains economists expected and far fewer than the 916,000 jobs added in March, indicating that the long-tepid labor market recovery is slowing down again even as stocks and corporate earnings rip higher.”

A 2020 analysis of the increased unemployment benefits by University of Chicago economists Peter Ganong, Pascal Noel and Joseph Vavra found that 76% of unemployed workers were receiving benefits above their lost wages, and that the estimated median replacement rate — which compares the worker’s original weekly salary to what is being replaced by unemployment benefits — is 145%, nearly half more than their original wage.

The $1.9 trillion bill also drove inflation, which hit its highest level since the Great Recession for every subsequent month after the bill was passed. 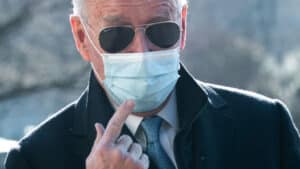 JAB$: Biden Calls on States to Offer $100 Payouts for Americans Who Get COVID Vaccines