The Federal Bureau of Investigations opened multiple investigations into parents who protested at school board meetings, according to new insider information provided to lawmakers.

The investigations were opened following a request from the National School Boards Association in October of 2021.

Lawmakers were informed of the FBI’s actions by whistleblowers, according to a letter from Republicans on the House Judiciary Committee to Attorney General Merrick Garland

“In a sworn testimony before this Committee, you denied that the Department of Justice or its components were using counterterrorism statutes and resources to target parents at school board meetings,” wrote Ohio Representative Jim Jordan and Lousiana Representative Mike Johnson

The new evidence allegedly shows the FBI conducted at least 12 investigations into parents under its Counter Terrorism Division. The subjects of the investigations include parents who objected to mask mandates as well as elected state officials who spoke publicly against the mandate. The cases were internally tagged “EDUOFFICIALS” and were conducted in “almost every region of the country.”

The representatives noted that the investigations “are the direct result of, and would not have occurred but for” a directive to federal law enforcement from Garland.

🚨 SMOKING GUN: Whistleblowers reveal the FBI has labeled dozens of investigations into parents with a threat tag created by the FBI’s Counterterrorism Division pic.twitter.com/uDMd7x1no3

In one instance, a mom was investigated after she reportedly told a school board member “we’re coming for you” and she was supposedly affiliated with a “right-wing mom’s group” called Moms for Liberty. The mom told investigators that she was referring to voting board members out of office.

One dad was reported to the FBI because he “fit the profile of an insurrectionist” and owned guns. The bureau investigated him although it noted there was no “specific information or observances of … any crimes of threats.” The tip came through a website created by the Justice Department.

Ultimately, no charges were brought against anyone subjected to an investigation.

“You have subjected these moms and dads to the opening of an FBI investigation about them, the establishment of an FBI case file that includes their political views, and the application of a ‘threat tag’ to their names as a direct result of their exercise of their fundamental constitutional right to speak and advocate for their children,” the Republican Judiciary Committee members wrote.

The lawmakers called on Garland to rescind his Oct. 4 memorandum directing the FBI to investigate claims of threats against school board members. They also asked the attorney general to provide a series of previously requested documents and to preserve all records responsive to their letter.

Citing the PATRIOT Act, the NSBA requested Garland to look into parents who protested school board meetings as possible domestic terrorists.

Garland told the House Judiciary Committee on Oct. 21 that the DOJ was looking into accused parents as possible domestic terrorists.

“I want to be clear. The Justice Department supports and defends the First Amendment right of parents to complain as vociferously as they wish about the education of their children, about the curriculum taught in the schools,” Garland said. “That is not what the memorandum is about at all, nor does it use the words ‘domestic terrorism’ or ‘PATRIOT Act.’”

The school board organization later distanced itself from the letter, dated Sept. 29, and issued an apology to its members.

“To be clear, the safety of school board members, other public school officials, and students is our top priority, and there remains important work to be done on this issue,” the board said in a statement. “However, there was no justification for some of the language included in the letter.” 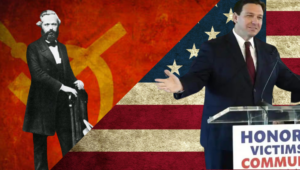 OPINION: Communism and CRT — Why They Both Suck