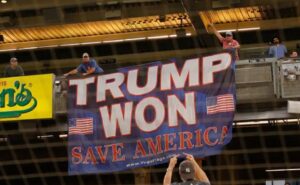 The fan who hung the “Trump won” banner at Major League Baseball fields will no longer be permitted to attend baseball games.

Dion Cini gained notoriety after traveling to “to Yankee Stadium, Citi Field, and Fenway Park” and displaying a
banner that read “Trump Won.”

Cini was ejected from each stadium but never arrested.

The Trump supporter made an announcement about “#OperationFlagDrop” to his Twitter following on Sunday.

Please help us take a stand from the American hating athletes (paid actors) and their handlers. If you need instructions PM me, its not just a drop and go, there's a process. It takes a team of Patriots, to combat these self loathing USA haters. pic.twitter.com/6OjpY7OWuy

“Following each incident, Cini has posted body-camera footage of the spectacle to his Twitter and Youtube channels. The reactions he’s gotten from fans and security have differed each time; in one case, police even protected Cini from angry fans,” Business Insider reported.

At the New York Yankees vs the Toronto Blue Jays game on May 27th, Cini and his co-conspirators were allowed to keep the sign.

On May 29th at the New York Mets vs Atlanta Braves game, “a fan shoved [Cini]from behind” while he talked to police about the banner. “Two policemen then slammed the fan against the wall, tackled him to the ground, and escorted him out of the stadium in handcuffs, the footage shows.”

Most recently, Fenway Park security escorted Cini from the stadium and did not return the banner.

Finally, on June 11th, the 52-year old received a letter banning him from all 30 MLB-Stadiums.

According to The Daily Mail, “Cini, a New York native, responded to his indefinite suspension by urging his Twitter followers to attend MLB games to unfurl their own ‘Trump Won’ banners, which he happens to sell online. Previously, Cini was reportedly banned at Disney World for holding up a ‘Trump 2020’ sign on a ride.”

Despite the MLB’s actions, copcats have taken up the cause. At a Miami MArlins game, five people were ejected for unfurling banners that read “Trump Won, Take Back America” and “Proud Boys Did Nothing Wrong — Free All Political Prisoners 1/6/21.” 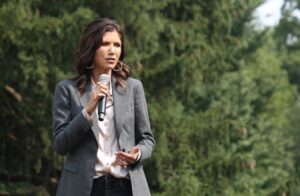