“Think of the vaccine as a large, ethnic bouncer, [and] COVID as the drunk, entitled white kid yelling, ‘Do you know who my father is?'” the doctor tells the animated character.

Baby Stewie hops in to help convince his cartoon father to get the jab.

“Vaccines have been around for hundreds of years. They helped eliminate smallpox from the face of the Earth and they’re well on their way to doing the same with polio,” Stewie says. “Those were once devastating diseases, you understand. And now, thanks to vaccines, you don’t even have to worry about them.”

Stewie and Brian, the dog, then take a journey inside Peter’s body to explain how vaccines work.

“Right, like that chick at the bowling alley,” Brian adds.

The Hill reports that the video was produced by Fox Entertainment, the Ad Council’s “It’s Up to You” COVID-19 vaccine education initiative, 20th Television Animation and Fuzzy Door.

Disney Television Studios said in a statement that the goal of the video is to “educate, entertain and encourage the millions of unvaccinated citizens around the globe to feel confident getting vaccinated against COVID-19,” but it told “with all the irreverence and hilarity from which ‘Family Guy’ is known.” 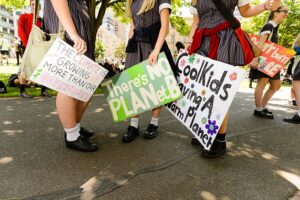