The study was released ahead of the UN Climate Change Conference

The first large-scale study of climate anxiety found that half of all young people globally are experiencing such severe climate anxiety and distress that it is impacting their daily lives and functioning.

The study, from the University of Bath in the United Kingdom, surveyed 10,000 young adults and teenagers of ages 16-25 in 10 different countries, including the United States, Australia, India, Nigeria, and the Philippines. Through a polling company known as Kantar, these teens and young adults were asked about their thoughts and feelings regarding climate change as well as government response.

According to the study’s authors, 45% reported that anxiety and stress relating to climate change issues affect their daily lives and functioning.

Around 75% said they believe the “future is frightening,” and 65% said their governments aren’t doing enough to combat catastrophes that will be exacerbated by climate change.

Moreover, 38% of the respondents from the UK said they were “hesitant to have children,” while 57% said governments were “betraying me and/or future generations”

According to CNBC, “young people from countries in the Global South expressed more worry about the climate crisis, with 92% in the Philippines describing the future as ‘frightening.’ However, 81% of the young people surveyed in Portugal also expressed this level of concern, the highest rate among the Global North countries included in the study. Portugal has seen an increase in wildfires in recent years amid higher temperatures.”

“This study paints a horrific picture of widespread climate anxiety in our children and young people,” said University of Bath professor Caroline Hickman, the co-lead author of the study,

“It suggests for the first time that high levels of psychological distress in youth is linked to government inaction,” she added in her statement.”Our children’s anxiety is a completely rational reaction, given the inadequate responses to climate change they are seeing from governments. What more do governments need to hear to take action?”

“Young people all over the world are well aware that the people in power are failing us,” said teenage climate activist Greta Thunberg when asked to comment on the study. “Some people will use this as another desperate excuse not to talk about the climate — as if that was the real problem.”

The scientific study is the largest of its kind and was released weeks before the UK hosts the UN Climate Change Conference of the Parties (COP26) in Glasgow.

The University of Bath noted “The costs of the survey were funded by AVAAZ” which is “funded by small donations from citizens worldwide which allows it to finance urgently needed quantitative research in the emerging field of climate psychology. Avaaz has been campaigning on climate change for over a decade.” 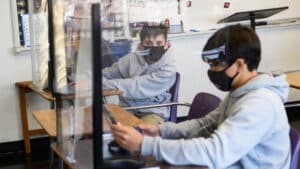 Teacher Posts Essay on Reasons She’s ‘About to Quit,’ Claims ‘Thousands of Others’ Will Do the Same