A wrongful death lawsuit has been filed over the shooting of Robert “LaVoy” Finicum, who was killed by Oregon state troopers in 2016 during the occupation of Malheur National Wildlife Refuge.

The lawsuit maintains that the Arizona rancher and activist was shot “assassination style” diliberately to silence his political speech — and the speech of others who agreed with him.

Finicum, 54, had been acting as a spokesperson for the activists, led by Ammon Bundy, who occupied the wildlife refuge for over a month in protest of the imprisonment of ranchers Dwight and Steven Hammond.

Finicum and his passengers had left the ranch to meet with Sheriff Glenn Palmer from Grant County, Oregon — who was sympathetic to their cause. Instead, they were chased by federal and state agents and crashed their vehicle into a snowbank.

Following the crash, the government claims that two shots were fired into the white Dodge Ram truck by the FBI — and Oregon State Police troopers fired six more. Finicum was fatally shot three times in the back. There were four passengers that were inside the vehicle during the incident.

The FBI agent who filed the first shots initially lied about their involvement.

FBI agent W. Joseph Astarita was charged for making false statements and obstructing justice by denying that he had fired twice into the vehicle, but he was acquitted in 2018.

Lawyers for the Finicum family and estate wrote in the complaint that “the tragic killing of LaVoy, was the result of a brutally deliberate course of action, unconstitutional conduct and a series of individually wrongful and negligent actions,” that were the product of collusion between government actors.

“Defendants’ plans, events and actions carried out on January 26, 2016 were significantly motivated by political and personal animus of government agents and officers who intentionally sought to discredit and disempower the political speech and protests of LaVoy and his associates,” the lawsuit states.

This lawsuit names the Bureau of Land Management, the state of Oregon, the Oregon State  Police, Oregon Governor Katharine Brown, Harney County, and the Harney County Sheriff, Daniel P. Love, FBI agent W. Joseph Astarita, FBI Special Agent “BM,” and Michael Ferrari. It states that they “conspired with each other and together, to cause LaVoy Finicum’s harm and ultimate death.”

The legal team representing the family compared Finicum’s shooting to the shooting of a North Korean man who had been attempting to flee the country while being aggressively pursued by armed government agents. After his truck crashed on the side of the road, he was shot five times as he sought protection across the border.

“The story was captivating, because in the American  psyche, the idea of being shot in the back, by your own government, for trying to cross a political  border while fleeing for safety – is unthinkable,” the complaint states.

Unlike Finicum, the North Korean man survived and ultimately did make it across the border to safety.

“This lawsuit is brought to obtain relief for LaVoy’s surviving heirs, and to ensure that the idea of being shot in the back, by your own government, while trying to cross a county border to spread a political message, and while seeking protection by bona-fide law enforcement, from unhinged, overreaching, and corrupt federal and state officers, can return to being what it once was in the minds of American citizens — unthinkable,” Finicum’s legal team wrote in the complaint.

Finicum’s estate and family is being represented by John Pierce and the National Constitutional Law Union Inc. (NCLU).

Speaking to Timcast, Pierce explained that Finicum’s wife Jeanette has not stopped seeking justice over the last five years.

“On January 26, 2016, American citizen LaVoy Finicum was tragically shot in the back three times by his own government,” Pierce told Timcast. “Since that day, Jeanette Finicum has heroically kept the faith and pursued justice for her beloved late husband. She is a woman of strength and determination, but she should not have to fight this fight alone.”

Last week, Pierce’s organization, the NCLU, took on the case.

“On Friday, the NCLU joined the fray on behalf of Jeanette and all those who seek accountability for the killing of LaVoy, supporting the legal team that filed the Third Amended Complaint in this case,” Pierce continued. “In an age of undeniable, dangerous and increasing government tyranny in the United States, it is more important than ever that freedom-loving Americans stand together to fight for those whose Constitutional rights have been trampled. The National Constitutional Law Union will be doing that for generations to come. Please help us obtain justice and accountability for Jeanette and LaVoy.”

The mission of the NCLU, according to their website, is to preserve and protect the United States Constitution and the American way of life “by providing legal support and funding to individuals whose Constitutional rights, civil liberties and similar rights are being violated or in jeopardy.”

Those who wish to contribute to the NCLU can do so here. 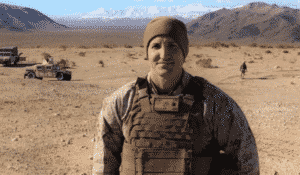