A top European Union official made a prediction that hate speech laws, similar to the ones found throughout Europe, will soon be coming to the United States.

Věra Jourová, Vice-President of the European Commission, made the statements during a panel discussion at the World Economic Forum summit in Davos, Switzerland.

“Well, we need the people who understand the language and the case law in the country,” Jourová said while speaking on a panel called “The Clear and Present Danger of Disinformation.”

"Illegal hate speech, which you will have soon also in the U.S. I think that we have a strong reason why we have this in the criminal law." pic.twitter.com/iLR1MePTYT

She added, “Because what qualifies as hate speech, as illegal hate speech — which you will have soon also in the U.S. — I think that we have strong reason why we have this in the criminal law.”

Europe has been on the frontlines of the effort to criminalize the ill-defined term “hate speech” and punish its citizens for speech the government disfavors. Such measures would be more difficult to codify in the U.S., which has a Constitution that protects individual rights to free speech.

However, several attempts to censor speech have already moved forward in the U.S.

Last year, the EU agreed on a new Digital Services Act, which forces Big Tech companies like Google and Facebook to create new policies and procedures to speed up the removal of online content. The agreement also polices algorithms that recommend content to users.

Jourová said during the panel discussion, “Regulators are already closely monitoring compliance with the applicable data protection rules, and we will be able to enforce the Digital Services Act later this year as well.” 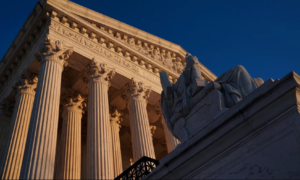 Supreme Court Has Not Identified Source of Abortion Case Leak