Estonia Only Has One Candidate For President

For the first time since it regained independence, Estonia only has one presidential candidate.

The nation’s 101-seat Riigikogu Parliament must replace outgoing president, Kersti Kaljulaid, on Monday. Her second five-year term expires on Oct. 10. While she has previously indicated an interest in staying in her post, she does not have the parliamentary support to secure reelection.

As of Saturday, only one person had filed to fill the largely ceremonial post.

Alar Karis, the director of the Estonian National Museum and former state auditor, is currently the only contender for the position. He has also served as the head of the University of Tartu, Estonia’s main academic institution.

Karis, 63, has the support of 21 lawmakers, the required minimum. He also has the endorsement of Prime Minister Kaja Kallas’ Reform Party and the Center Party, which make up Estonia’s center-right coalition government.

Tonis Sarts, an associate professor in comparative politics at Tallinn University, told AP News that Karis “is probably one of the most well-prepared candidates considering the domestic policy dimension but he hasn’t had any practical experience in foreign policy-making and diplomacy.”

EKRE, Estonia’s populist, right-wing political party, proposed its own candidate but was unable to secure the support of enough lawmakers to register him.

Estonia law requires parliament to vote on Karis even though there are no alternative presidential candidates. Because of unusual circumstances, “several politicians have called for a complete overhaul of Estonia’s complex presidential election system. Some Estonians have even suggested that the small European nation, where the prime minister holds most political power, should abolish the head of the state post altogether,” notes AP News.

In its initial secret ballot vote, the Riigikogu “failed to produce a result” as Karis did not receive “the necessary two-thirds majority to be confirmed in the role.

“Karis received the support of 63 of the 94 lawmakers present. A further 16 members abstained. Under Estonia’s constitution, parliament must vote again on Tuesday in a second and, if necessary, a third ballot. New candidates can be nominated for each of these,” reports DPA.

“The prime minister holds [the] most power in Estonia, a European Union and NATO member of 1.3 million people,” noted ABC News. The president largely represents the nation abroad and serves as “a domestic opinion leader.”

Notably, however, the Estonia president is the supreme commander of the armed forces, formally appoints government members, validates laws with his signature, and may exercise veto powers. 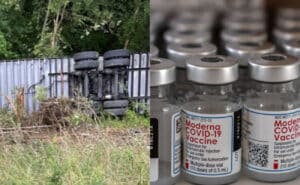 HHS Says All 1.2 Million Moderna Vaccines From WV Truck Crash Are Accounted For

3 responses to “Estonia Only Has One Candidate For President ”