Estonia officially requested the United Nations establish a no-fly zone over Ukraine while Russia’s military advance in the county continues.

“The Riigikogu asks the UN member states to take immediate steps to establish a no-fly zone in order to prevent massive civilian casualties in Ukraine,” the body stated. “The Riigikogu urges all national parliaments to adopt statements that call on their governments to support the imposition of additional sanctions against the Russian Federation as well as the Republic of Belarus that participates in the aggression,” Estonia’s parliament, known as the Riiigikogu, said in a statement on March 14.

The nation’s parliament also formally voiced its support for Ukraine’s application to join the European Union and path to NATO membership.

Estonia is the first NATO member to request the establishment of a no-fly zone.

If enacted, the no-fly zone would require NATO members to confront any Russian plane above Ukraine in violation of the ban.

Zelenksyy has argued that without establishing the no-fly zone, Russia could expand its military efforts into more countries.

“If you don’t close our sky, it is only a matter of time before Russian rockets fall on your territory, on NATO territory,” the Ukrainian president said in a March 14 video.

Russia President Vladimir Putin said his government would regard the implementation of a no-fly zone over Ukraine as “participation in the armed conflict,” per Newsweek. 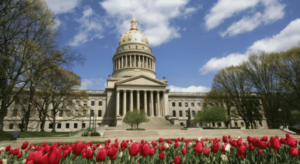 West Virginia Will Not Lower Income Tax in New Budget