The agency will give school districts grants to buy just under 2,500 buses

The Biden administration will increase its financial support for the transition to zero-emission vehicles through $965 million in new grants.

The grants will help 389 school districts buy 2,463 new electric buses at a total cost of $913 million as part of the Clean School Bus Rebate Program.

The recipients of the grants will be announced by Vice President Kamala Harris and Environmental Protection Agency Administrator Michael Regan at an event in Seattle on Oct. 26.

The EPA received 2,000 applications that requested in total $4 billion for more than 12,000 buses – a mix of electric and diesel. The EPA accepted applications from all 50 states including Washington, D.C., New York City, Dallas, Houston, Atlanta, and Seattle as well as Wrangell, Alaska, Anniston, Alabama, Teton County, Wyoming, to Wirt County, West Virginia.

“President Biden’s historic Bipartisan Infrastructure Law is accelerating our nation’s transition to electric and low-emission school buses while ensuring a brighter, healthier future for our children,” said Regan in a press release. “Thanks to the Biden-Harris Administration, we are making an unprecedented investment in our children’s health, especially those in communities overburdened by air pollution. This is just the beginning of our work to build a healthier future, reduce climate pollution, and ensure the clean, breathable air that all our children deserve.”

The agency had initially set aside $500 million for the clean bus initiative but almost doubled that amount in September.

Of the new buses, 95% will be powered by electricity, according to AP News.

President Joe Biden announced in April of 2021 that his administration would aim to reduce greenhouse gas emissions by 50% to 52% by 2030 and to become a net-zero emission by 2050.

“There are multiple paths to reach these goals, and the U.S. federal, state, local, and tribal governments have many tools available to work with civil society and the private sector to mobilize investment to meet these goals while supporting a strong economy,” said the White House.

In addition to advancing his administration’s environmental goals, the EPA notes the 2022 Clean School Bus Rebate program “delivers on President Biden’s Justice40 Initiative, which aims to deliver 40% of the overall benefits of certain federal investments to disadvantaged communities that are marginalized, underserved and  overburdened by pollution.” 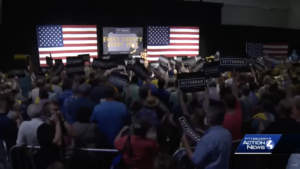