An abortion clinic license has suffered an early termination following a disclosure from health officials that three patients had been hospitalized following procedures at the site.

On May 20, the Florida Agency for Healthcare Administration issued an emergency order to the American Family Planning of Pensacola, an abortion clinic operated by Integrity Medical Care LLC, suspending their operations until a review can be conducted.

According to the order, the abortion clinic failed to report the hospitalizations of women who underwent procedures on at least three occasions and did not keep a record of their vital signs while they were under their care.

Abortion clinics that provide second-trimester procedures must maintain a record of serious injuries that result from their procedures and report those incidents within ten days, which the order alleges Integrity Medical Care did not.

“The medical record contains no record of monitoring or assessment of the patient during the procedure and afterward,” the order reads. “This lack of documentation also includes no record of vital signs.”

On  May 6, one woman reportedly arrived at an Alabama hospital “hemodynamically unstable, tachycardic with no initial blood pressure,” and with oxygen saturation in the 80s. The hospital had to resuscitate her and provide a mass transfusion to replace egregious blood loss.

Despite the abortion facility maintaining a transfer agreement with a local hospital, they did not offer to facilitate the woman’s relocation after her discharge. Instead, they told her spouse to take her to a hospital across state lines in Mobile, Alabama — an instruction the spouse protested, preferring a local Pensacola hospital.

American Family Planning recorded no effort to contact her to provide further aftercare following her treatment.

A second woman was sent to the hospital on March 23, following a procedure described by personnel at the facility as leaving the surgical room floor covered in pools of her blood. The hospital surgeon reported that when she arrived at the hospital, she was unconscious, intubated, and already in the process of receiving a transfusion. The damage to her uterus was so severe that doctors were forced to perform a total abdominal hysterectomy.

The Pensacola abortion clinic has failed to maintain compliance with record-keeping in the past, with numerous fines levied by AHCA for its failure to submit data on the number of abortions it has performed.

The abortion clinic was previously cited in November 2021 for failing to report a third procedure requiring hospitalization. The patient required uterine surgery to repair a perforation and partial removal of her colon.

The emergency order and compliance violations can be viewed in their entirety here by entering “American Family Planning” into the search box marked “Party Name.” 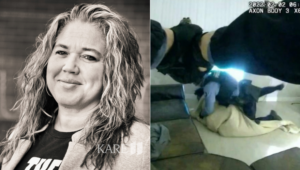