Elon Musk announced a price increase along with updates to Twitter’s subscription service in a series of tweets on Tuesday.

The announcement comes after speculation the platform would begin charging a monthly fee for users to obtain or maintain a blue check mark verification badge following Musk’s Thursday acquisition of the company. Musk’s announcement confirmed speculation in what appears to be a merge between the company’s verification system and Twitter’s “Twitter Blue” subscription service. Changes to the platform’s subscription are reportedly an effort to reduce bots and impersonators on Twitter, according to Musk.

“Twitter’s current lords & peasants system for who has or doesn’t have a blue checkmark is bull—-,” Musk announced Tuesday afternoon. “Power to the people! Blue for $8/month.”

Twitter’s current lords & peasants system for who has or doesn’t have a blue checkmark is bullshit.

Power to the people! Blue for $8/month.

The new Twitter owner further announced Twitter Blue subscribers would receive priority algorithm placement in replies, mentions, and search which Musk described as “essential” to defeat spam and scams on the platform. Users will also have the ability to make longer video and audio posts along with experiencing “half as many ads.”

You will also get:
– Priority in replies, mentions & search, which is essential to defeat spam/scam
– Ability to post long video & audio
– Half as many ads

“And paywall bypass for publishers willing to work with us,” Musk continued.

One user responded to the proposed revenue stream, saying, “creator payments is HUGE to incentivize content creation. love this idea :)”

Musk agreed with the user’s sentiment.

“Creators need to make a living!”

Founder and Executive Chairman of Micro Strategy responded to Musk’s announcement, “The bots won’t like this.”

“Yes, this will destroy the bots,” Musk replied. “If a paid Blue account engages in spam/scam, that account will be suspended. Essentially, this raises the cost of crime on Twitter by several orders of magnitude.”

Yes, this will destroy the bots. If a paid Blue account engages in spam/scam, that account will be suspended.

Essentially, this raises the cost of crime on Twitter by several orders of magnitude.

Twitter Blue, which grants subscribers access to exclusive features such as the ability to edit tweets and read articles from partnered United States publishers without ads, is currently priced at $4.99. Originally available in June 2021 to Canadian and Australian users, the service launched for users in the United States last November. A portion of the subscription fee goes towards outlets including the Washington Post, Insider, Los Angeles Times, The Atlantic, and Rolling Stone.

“This is fake – I did *not* tweet out a link to The New York Times!” Musk replied.

This is fake – I did *not* tweet out a link to The New York Times! pic.twitter.com/d6V6m5ATW2

Since his acquisition of the company last week, Musk appears to have changed his profile bio from “Chief Twit” to “Twitter Complaint Hotline Operator” as a cheeky reference to an uptick in users tweeting their complaints about the platform to the tech billionaire. 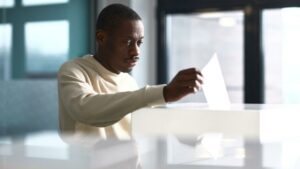