Officers shooting at the unarmed protestors marks a sharp escalation in the growing conflict over government mandates.

🇳🇱 The Dutch police have fired shots at completely peaceful and unarmed farmers. This is why you don’t give up your guns; unarmed people don’t stand a change against tyranny. pic.twitter.com/K1UN5J1U0c

Police stated that “tractor drivers attempted to drive into officers and service vehicles,” prompting them to issue targeted warning shots.

Video posted to social media shows tractors driving around the vehicles at the time police bullets struck them.

Earlier this week, a massive convoy with an estimated 40,000 people blocked supermarkets, distribution centers and roads to protest government plans requiring farmers to use less fertilizer and reduce livestock numbers. The cuts could force some farms to close.

Dutch lawmakers want to cut emissions of nitrogen oxide and ammonia by 50 percent nationwide by 2030 and voted on July 5 to enact more restrictive laws. Farmers who do not comply with the new mandates can have their properties seized by the Dutch government.

The government has been forced to enact harsher restrictions after a series of court rulings blocked infrastructure and construction projects amid fears that emissions would violate environmental rules, according to ABC News.

In 2019, The Netherlands’ Supreme Court upheld a lower court ruling that ordered the Dutch government to cut carbon emissions by 25 percent. The plaintiff in the original case, which was brought before the lower court in 2015, was the non-profit Urgenda Foundation, which celebrated their victory.

“This is the first time a court has determined that states have an independent legal obligation towards their citizens,” said Dennis van Berkel, legal counsel for Urgenda. “That must inform the reduction commitments in [the Paris Agreement] because if it doesn’t, they can expect pressure from courts in their own jurisdictions.”

The Netherlands’ Supreme Court ruling is driving the heavy restrictions against Dutch farmers.

The decision claimed that the potential damages to current and future generations was so great and concrete that, given its fiduciary duty, “the state must make an adequate contribution, greater than its current contribution, to prevent hazardous climate change,” according to The New York Times.

As protests by farmers have intensified, ten distribution centers have been blocked, leading to food shortages and bare shelves. 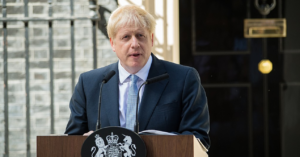