Dr. Fauci Admits Vaccine Approval Committee Members Do Not Have to Disclose Kickbacks From Manufacturers During Fiery Exchange With Sen. Paul

Sen. Rand Paul and Dr. Anthony Fauci battled it out once again during a Senate hearing Thursday.

In one of the most striking moments of the exchange, Dr. Fauci admitted that people on the vaccine approval committees do not have to disclose receiving royalties from drug manufacturers.

“Here’s what I want to know, it’s not just about you, everybody on the vaccine committee. Have any of them ever received money from the people who make vaccines?” Sen. Paul asked.

“Sound bite No. 1 — are you going to let me answer a question?” Fauci snarked, before saying that “people who receive royalties are not required to divulge them — even on their financial statement — according to the Bayh Dole Act.”

I asked, “Can you tell me if anyone on the vaccine approval committees ever received money from the people who make vaccines?”

Fauci : “People who receive royalties are not required to divulge them.” pic.twitter.com/a0YIm2jfvZ

The Bayh Dole Act is meant to allow inventors ownership of their work, even if it is derived from research that is federally funded.

President Joe Biden’s 81-year-old chief medical adviser appeared before the committee remotely as he tested positive for COVID-19 earlier in the week.

Sen. Paul also grilled Fauci over the lack of studies showing a decrease in hospitalizations of vaccinated children.

“Right now there’s not enough data that has been accumulated, Senator Paul, to indicate that that’s the case,” Fauci said. “I believe that the recommendation that was made was based on the assumption that you can look at the morbidity and mortality of children within each of the age groups, you know, zero to five, five to 11.”

The National Institute of Allergy and Infectious Diseases director and Sen. Paul have had a severely contentious relationship throughout the pandemic.

In March, the senator introduced an amendment to get rid of Dr. Fauci’s job entirely.

In an op-ed for Fox News about the amendment, Sen. Paul wrote “we’ve learned a lot over the past two years, but one lesson in particular is that no one person should be deemed “dictator in chief.” No one person should have unilateral authority to make decisions for millions of Americans.”

Fauci has held the position of director of the NIAID since 1984. ​​He is currently the highest-paid federal employee. 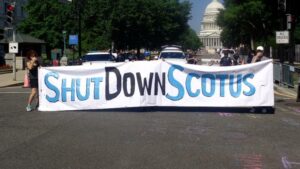