A neighbor of Supreme Court Justice Brett Kavanaugh was told by local police that the United States government will not enforce a federal law that prohibits protests outside of a justice’s home.

“Whoever, with the intent of interfering with, obstructing, or impeding the administration of justice, or with the intent of influencing any judge, juror, witness, or court officer, in the discharge of his duty, pickets or parades in or near a building housing a court of the United States, or in or near a building or residence occupied or used by such judge, juror, witness, or court officer, or with such intent uses any sound-truck or similar device or resorts to any other demonstration in or near any such building or residence, shall be fined under this title or imprisoned not more than one year, or both.”

The law is in place to prevent intimidation that may impact the ruling in a pending case.

Protests have been a regular occurrence outside of Justice Kavanaugh’s home since the leak of a draft opinion suggested the Court may be intending to overturn the landmark abortion decision in Roe v. Wade.

The 67-page draft opinion showed justices — at the time — favored upending Roe by a 5-4 margin. Neither is it clear if any justices on either side have flipped, nor when the final decision will be issued.

Protestors usually appear outside of Justice Kavanaugh’s home on Wednesdays and Saturdays, according to Fox News.

“They have drummers, they have a megaphone, and they chant, they yell all kinds of things… They have told neighbors ‘f— you, f— your children, things like that – and so they’re abusive toward the neighbors and intimidating,” a neighbor told Fox.

“What we’ve also been told is that this is ‘behaving within the bounds of the law’ and the only law that could be enforced is the federal law that they’re not supposed to protest outside the home of judicial officers, but the federal partners declined to enforce that law,” they said.

Reports that the U.S. Department of Justice (DOJ) refuses to enforce the law banning these protests surface during the same week a federal grand jury indicted a California man on “federal charges of attempting to murder a Justice of the United States, specifically, an Associate Justice of the Supreme Court,” according to a statement from the DOJ.

Nicholas John Roske, age 26, of Simi Valley California, allegedly traveled to Maryland with the intent to kill Justice Kavanaugh at his home. While near the justice’s home, Roske texted his sister, who convinced him to contact 911 in order to turn himself in.

Roske was arrested around 1:30 a.m. EST on June 8 just a block from Kavanaugh’s Maryland home. He was apprehended wearing a tactical vest and in possession of a knife, pistol with two magazines, pepper spray, and other tools commonly used in burglaries.

The U.S. House passed legislation this week that would increase protection for justices and their families. The Senate passed it in May. 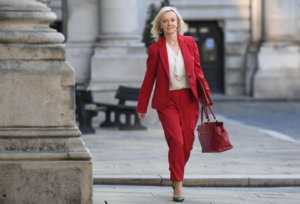