Doritos and Twix Launch New LGBTQ Commercials Ahead of Halloween

The ads, featuring a gay ghost couple and a 'non-binary' child, have garnered major attention online

Doritos marked the Mexican ‘Day of The Dead’ with a  Pixar-styled animation of a family going to the grave of a loved one to leave a bowl of chips. The November 1st holiday honors deceased family and loved ones.

“Dia de Los Muertos honors the dead with festivals and lively celebrations, a typically Latin American custom that combines indigenous Aztec ritual with Catholicism, brought to the region by Spanish conquistadores,” according to National Geographic. “Dia de Los Muertos is celebrated on All Saints Day and All Souls Day, minor holidays in the Catholic calendar.”

In the commercial, an elderly woman places a bowl of chips by a photo of Uncle Alberto on an “ofrenda”- a bridge connecting souls in this world to those in the afterlife.

The ghost of Uncle Alberto then appears to greet his family, who are happy to see him. The living relatives are surprised when another man appears over Alberto’s shoulder.

“Who is he?” a family member asks.

“This is Mario,” Uncle Roberto replies, “my partner.”

The ghost men then hold hands while the living family members cheer.

Doritos Mexico post the commercial to its Instagram account on Oct. 18 with the caption, ‘Pride will now be part of our traditions,’ per The Washington Examiner.

“While some have praised the commercial for connecting queer identities to cultural traditions, others have commented that there is a mixed message of only being one’s true, queer self in death,” noted The Advocate.

A representative for Doritos told the outlet that the Day of The Dead celebration was “an opportunity for Doritos Mexico to celebrate love and our commitment to the LGBTQ+ community every day.”

The chip commercial is one of two commercials that has caught viral attention.

Twix released an ad featuring a boy wearing a princess dress whose goth nanny scares away children who question or mock his choice.

At the end of the commercial – after the boy tells a bully “dressing this way makes me feel good” – the boy’s nanny summons a wind storm and blows the bully away. Only his cape is left fluttering to the ground.

The synopsis for the ‘bite-size Halloween’ commercial  says “With a little magic, the new nanny helps a non-binary child deal with bullies and find self-acceptance.”

It was written and directed by Bridget Moloney, who says her children’s goth nanny inspires her kids “to wear whatever they want and express themselves more fully through their clothes.”

“It got me thinking about what the more extreme version of that would be–what kind of power do you have when you own your identity? And how can you extend that power to those who need help?” said Moloney.

Twitter users questioned what the commercial had to do with the candy, which only appears in the final seconds of the video. Others denounced the implication of violence.

So the message is this.

1. Lie to children about how God made them.
2. Anyone who opposes this lie is by definition a villain.
3. It’s funny to destroy the people who oppose the lies.

I don’t do boycotts, but this one is actually making me reconsider. https://t.co/T22SqQYXmT

These people ruin everything. https://t.co/lpyPHU4MSf

At this time, Mars, Inc., which owns the Twix brand, has not released a statement about the commercial. 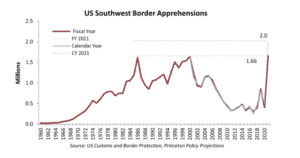 New Projection Predicts A Total of 2.1 Million Illegal Crossings in 2021