Former President Donald Trump, his daughter Ivanka, and son Don Jr. will not take part in previously scheduled depositions following the death of his ex-wife, Ivana.

The office of New York Attorney General Letitia James agreed to postpone the under-oath questioning originally set for July 15. James has been leading an investigation into Trump’s business dealings in the state for the last three years.

“We offer our condolences to the Trump family,” said Delaney Kempner, the attorney general’s office spokesperson, in a statement. “This is a temporary delay and the depositions will be rescheduled as soon as possible,”

A new date for the deposition has not yet been determined.

Trump announced on July 14 that the mother of his oldest three children had died in her Manhattan apartment. Ivana and Donald Trump were married for 15 years.

The official cause of death has not been determined.

James has accused the Trump Organization of improperly reporting the value of some real estate assets, including skyscrapers and golf courses, for financial gain. Her office alleges the company leveraged the false information for better loan conditions or for tax benefits.

Eric Trump runs the Trump Organization with his older brother Don Jr. He sat for a video deposition in October 2020 and pleaded the Fifth Amendment more than 500 times.

“Trump lost a series of court cases that attempted to quash the New York civil investigation as politically driven and then to avoid testifying,” reported The Guardian. “A lawyer for the attorney general’s office told a judge there is enough evidence to support legal action against the former president and his company but that no decision has been taken on prosecutions.”

Other members of the business are also being investigated by James’ office.

Allen Weisselberg, the former chief financial officer of the Trump Organization, has been charged with a tax fraud as part of a simultaneous investigation. He was indicted by a grand jury for allegedly taking part in a 15-year tax evasion scheme. The state contends Weisselberg received an apartment on the Upper West Side, two Mercedes-Benz vehicles, and private school tuition for two family members in lieu of compensation.

His trial is expected to take place later this year. 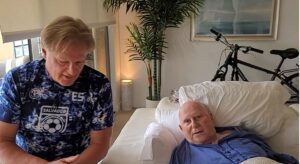