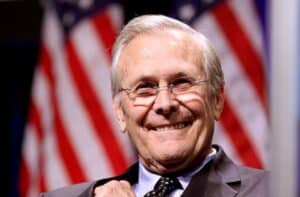 Rumsfeld’s controversial legacy notoriously includes his role as an architect of America’s wars in Iraq and Afghanistan.

According to NPR, “his post-9/11 strategy has become one of the hallmarks of U.S. foreign policy, and the bloody trail left in the wake of the 2000s invasions has left some to remember him as a skilled statesman, while others have blamed these interventions as responsible for destabilizing the region and roping American soldiers into seemingly endless war.”

“Rumsfeld was known for imperious treatment of some military officers and members of Congress and infighting with other members of the Bush team, including Secretary of State Colin Powell. He also alienated U.S. allies in Europe,” Reuters reports.

“With Rumsfeld in charge, U.S. forces swiftly toppled Iraqi President Saddam Hussein but failed to maintain law and order in the aftermath, and Iraq descended into chaos with a bloody insurgency and violence between Sunni and Shi’ite Muslims. U.S. troops remained in Iraq until 2011, long after he left his post.”

Following public outrage over the Iraq war and criticism of his possible mistreatment of suspected terrorists being questioned at Guantanamo Bay, Rumsfeld resigned his post in 2006.

Public reaction to Rumsfeld’s passing has been expectedly mixed.

David Corn, an MSNBC analyst, said on Twitter “Any obituary of Donald Rumsfeld that doesn’t specifically state that he shared responsibility for a misguided war that resulted in the deaths of 4000 American GIs and 200,000 or more Iraqi civilians is journalistic malfeasance.”

Donald Rumsfeld, the man who engineered the selling of chemical weapons to Saddam Hussein, and then who participated in the destruction of Iraq, has been recalled by the devil. pic.twitter.com/BPc0ThYPcv

President Bush said of his late Defense Secretary “All his life, he was good-humored and big-hearted, and he treasured his family above all else. Laura and I are very sorry to learn of Don’s passing, and we send our deepest sympathy to Joyce and their children. We mourn an exemplary public servant and a very good man.”

Born July 9th, 1932 in Chicago, Illinois, Donald Rumsfeld was an Ivy League athlete and a veteran of the United States Navy. He joined the Washington, D.C. political scene in the 1950s before later serving Illinois in Congress for four terms. In addition to his work with Ford and Bush, He also served in the Nixon administration.

“It is with deep sadness that we share the news of the passing of Donald Rumsfeld, an American statesman and devoted husband, father, grandfather and great grandfather,” a statement from his family said. “At 88, he was surrounded by family in his beloved Taos, New Mexico.”

The cause of death is multiple myeloma, a type of bone marrow cancer. 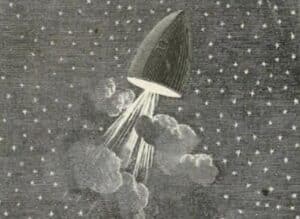