Theranos founder Elizabeth Holmes faces up to 80 years in jail after being convicted of defrauding investors to fund a blood-testing startup.

On Monday, a jury in San Jose, California, convicted Holmes on two counts of wire fraud and two counts of conspiracy to commit fraud.

She was acquitted on four other counts of fraud and conspiracy that alleged she defrauded patients who paid for Theranos tests. The jury was deadlocked on three counts related to other investors.

According to a report from The Associated Press, Holmes stayed seated and emotionless as the verdicts were read. She did not respond to reporters and local media questions as she walked from the courthouse to the hotel where she had been staying during jury deliberations.

Holmes will remain out on bond while awaiting sentencing.

Holmes modeled herself on Bill Gates and Steve Jobs and won widespread acclaim for a faulty technology that she claimed would revolutionize blood-testing methods by using only a finger prick.

The acclaim landed her the cover of Time at one point, giving the illusion of success for the fraudulent founder.

Holmes will be the most notable female executive to serve time since Martha Stewart if she is sent to jail.

During the trial, which spanned nearly three months, jurors heard testimony from former employees who said they left the company after discovering that the technology was faulty.

Investors testified that Holmes consistently shared misleading statements, including claims that its machines were being used in the field by the U.S. military.

At Theranos’ height, Holmes had amassed an estimated net worth of $4.5 billion on paper, being lauded globally as a self-made billionaire.

After the Wall Street Journal exposed the company’s flaws in 2015 and 2016, Theranos eventually collapsed. The Justice Department filed its criminal case in 2018, after careful review of the circumstances and false claims by the young founder.

A sentencing hearing has not been set at time of publishing. 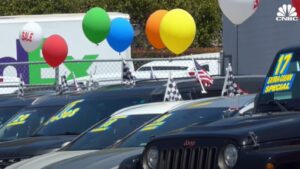