All six school board candidates who were endorsed by Florida Governor Ron DeSantis swept their races on Tuesday.

The newly elected school board members all support strong parental rights in education.

Two of the candidates, Cindy Spray of Manatee County and Jackie Rosario of Indian River County, credited Gov. DeSantis for their wins during an appearance on Fox News on Thursday morning.

“The support I got from Governor DeSantis is what put us over the edge,” Spray said during an appearance on Fox & Friends. “His view of how we need to stay back to the basics of education aligned with what I had viewed. And of course, my grandchildren. You have kids in school, you want to make sure that we’re getting the education system that we’re actually expecting from the public schools back to the basics and… supporting parental rights.”

Spray said that it was “tremendous” and “humbling” to have been endorsed by “America’s governor.”

“It was tremendous and quite humbling to get that kind of an endorsement from somebody… America’s governor,” Spray added. “And it just put us over the edge, and I just think… we’re going to do the right thing and give the parent choice that they want and just continue to run on his platform, work on his platform after we are sworn in.”

Rosario said that her work on the school board aligns with Gov. DeSantis’ education plan in the state.

“It’s exciting, I’m happy, I’m elated, I’m glad it’s over,” Rosario said. “It’s been a long run. I have been campaigning since January and I have hit some obstacles along the way, some naysayers that just want to lie and twist any kind of narrative just so that they can… be the opponents to the issues at hand, but I’m glad we have prevailed.”

“We won the race,” Rosario continued. “Governor DeSantis’ education plan aligns with the work that I had been doing all along on the school board, so it makes sense to endorse me, and I’m grateful for his endorsement, and I’m just happy that we won.”

In March, Gov. DeSantis made a strong effort to lessen the political indoctrination happening in schools by signing the Parental Rights in Education Act.

Branded the “Don’t Say Gay” bill by opponents, the legislation does not actually mention the word “gay,” but rather prohibits the teaching of gender identity or sexual orientation to students in third grade and below. The bill also ensures that at the beginning of every school year, parents will be notified about healthcare services offered at the school, with the right to decline any service offered.

“Parents’ rights have been increasingly under assault around the nation, but in Florida we stand up for the rights of parents and the fundamental role they play in the education of their children,” said Gov. DeSantis when the bill was signed. “Parents have every right to be informed about services offered to their child at school, and should be protected from schools using classroom instruction to sexualize their kids as young as 5 years old.” 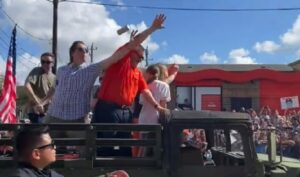 Man Who Threw Can of White Claw at Sen. Ted Cruz Claims He Was Trying to Get Him to Chug It