The letter follows a statement from the United States Department of Justice (DOJ) announcing their intention to monitor elections in 24 states — most of which lean Republican or are purple “toss-ups.”

“Earlier today, the Florida Department of State received copies of your letters to Miami-Dade and Broward Counties in which you seem to indicate that the Department of Justice will send monitors inside polling places in these counties,” read the letter. “We also understand you sent a similar letter to Palm Beach County.”

But Department of Justice monitors are not permitted inside a polling place under Florida law. Section 102.031(3)(a) of the Florida Statutes lists the people who “may enter any polling room or polling place.” Department of Justice personnel ate not included on the list. Even if they could qualify as “law enforcement” under section 102.031 (3)(a)6. of the Florida Statutes, absent some evidence concerning the need for federal intrusion, or some federal statute that preempts Florida law, the presence of federal law enforcement inside polling places would be counterproductive and could potentially undermine confidence in the election.

The DeSantis administration is attempting to block Department of Justice election monitors from gaining access to polling places in South Florida, saying that the federal government’s involvement would be “counterproductive” and in violation of state law.https://t.co/roJok84OQD

“Indeed, your letters do not detail the need for federal monitors in these counties,” the letter continued. “None of the counties are currently subject to any election-related federal consent.”

Your letters simply provide a non-exhaustive list of federal elections statutes as the basis for this action without pointing to any specific statutory authorization. When asked for specific authorization during our phone call this evening, you did not provide any. Accordingly, the Florida Department of State invokes its authority under section 101.58(2) of the Florida Statutes to send its own monitors to the three targeted jurisdictions. These monitors will ensure that there is no interference with the voting process.

Monitors will include personnel from the Civil Rights Division and from U.S. Attorneys’ Offices. In addition, the division also deploys monitors from the Office of Personnel Management, where authorized by federal court order. Division personnel will also maintain contact with state and local election officials. The Civil Rights Division’s Voting Section enforces the civil provisions of federal statutes that protect the right to vote, including the Voting Rights Act, the Uniformed and Overseas Citizens Absentee Voting Act, the National Voter Registration Act, the Help America Vote Act and the Civil Rights Acts. The division’s Disability Rights Section enforces the Americans with Disabilities Act (ADA) to ensure that persons with disabilities have a full and equal opportunity to vote. The division’s Criminal Section enforces federal criminal statutes that prohibit voter intimidation and voter suppression based on race, color, national origin or religion.

Broward County, Miami-Dade County, and Palm Beach County were included in the DOJ’s list along with counties and cities in 23 other states. 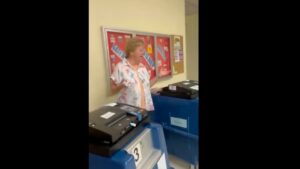 BREAKING: Up To 40% Of Ballots Not Counted At Polling Locations in Maricopa County, Arizona