Florida’s Department of Business and Professional Regulation warned the Orlando Philharmonic Plaza Foundation Inc. that they are prohibited from allowing minors into an explicit drag queen event on Wednesday night.

“A Drag Queen Christmas” is a touring event that has been performed across the country and marketed to “all ages.”

However, footage taken inside one of the events by independent journalist Tayler Hansen revealed the extremely graphic content of the show.

This performer paraded around with his “tits in a box” and shook his buttocks for the crowd.

At one point the Drag Queen said “are you reaching for my titties are you hungry” to a child in the audience.

Throughout the Drag Queen talking he had multiple people spank him. pic.twitter.com/7WrGDcv3bH

The day that the event was scheduled to happen in Orlando, the venue Plaza Live was sent a letter reminding them of the laws to protect children.

“It has come to the Department’s attention that you have contracted with Big Time Operator, LLC d/b/a ‘Drag Fans’ to offer the use of your licensed premises to conduct the ‘drag show’ performance,” the department wrote in the letter, explaining that the show contains “exposure or exhibition of sexual organs, simulated sexual activity, and/or the sexualization of children’s stories.”

The letter noted that the event has been “marketed to and attended by minors, including young children.”

“Sexually explicit drag show performances constitute public nuisances, lewd activity, and disorderly conduct when minors are in attendance,” the letter continues, explaining that there are “strict penalties for licensees who allow minors to attend these drag shows at their licensed premises.”

The agency warned that it is “your obligation to ensure that minors are prohibited from attending the Drag Fans drag show.”

“If minors are allowed to attend this drag show, the Department will take any and actions available to ensure that you do not pose a threat to minors in the future,” the letter concluded.

This Drag queen had a lot to say to children who were on the front row who were being given money by their mother to hand to the Drag Queens.

He engaged with two different children, a 9 and 10 year old.

“Are you having fun, are you enjoying it, are you confused yet?” pic.twitter.com/KydNKlJjND 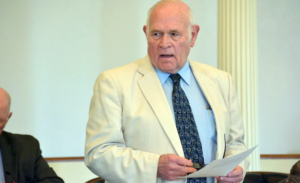