The Democrat New Jersey State Senate President is in serious danger of losing to Republican truck driver and grandfather Ed Durr — who spent less than $200 on his campaign.

Senate President Steve Sweeney broke records in 2017 for the nation’s most expensive campaign ever in a single legislative district while also wiping out several state records, according to a report from Insider New Jersey.

The New Jersey Globe had originally called the race for Senate President Sweeney, but had to issue a retraction shortly after 1 a.m., explaining “this race call was retracted at 1:11 a.m., after it became clear all three Democrats stood a strong chance of losing.”

“The New Jersey Globe is retracting its call of the 3rd legislative district in favor of Democrats; in a major surprise, all three incumbent Democrats stand a significant chance of losing to their unheralded Republican foes,” the newspaper’s retraction continued. “If Sweeney in particular does indeed lose, it would constitute a political earthquake in the New Jersey legislature. Holding the Senate Presidency since 2010, Sweeney is the longest-serving legislative leader in state history, and seemed to have an iron grip on the 3rd district – until tonight, that is.”

According to his website, Durr is a father of three and grand father to four who was born and raised in New Jersey. He has been a truck driver for the last 25 years.

Hello NJ, I am Edward Durr, the Republican senate candidate for legislative district 3. I’m a father of 3 & grandfather of 6. Life long resident of NJ. Not seeking power or fame, only give the people better representation. Lower taxes! Transparency! @nj1015 @1210WPHT @GlouCoGOP pic.twitter.com/YiOCzFjtSw

“I believe in God . I am hard working, trusting and very loyal. I believe in fiscal responsibility, transparency, and lower taxes. I also support the 2nd Amendment. I am not a polish politician who is looking for a career; instead, I would like to see government return to the hands of the people,” Durr’s campaign website explains.

Durr went on to explain that he wants New Jersey to go back to being the state that it was when he was a child. He said that he wants it to be a place people enjoy and can raise a family.

In total, Durr spent just $153 dollars on his campaign.

NJ Senate President Steve Sweeney is narrowly trailing right now to an opponent whose entire slate spent reported spending $153 as of 11 days before the election. pic.twitter.com/Zva5rVu46q

In contrast, Sweeney raised $750,000 for his campaign in just one night in January.

The race is currently too close to call. Local reporters have indicated that they believe results will be in by Wednesday morning. Timcast will update this story when more information becomes available. 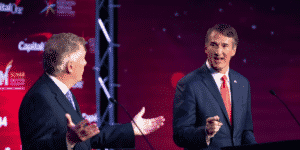