Esrati also referred to the president’s son Hunter Biden as a “dope fiend.”

The candidate attributed the president’s wealth to using insider knowledge for stock trading. He pointed out that people who work in certain government positions, including at the Treasury Department, are not allowed to trade.

“So why is congress trading?” Esrati asked.

“I know I’m a Democrat and everything, but do you want to tell me what Joe Biden’s done since he got elected when he was 27 years old?” Esrati said. “How does he own all those houses? How is he worth what he’s worth? I mean, yeah, a book deal here or there, but no, something isn’t right about going in and serving your country and getting to be a multi-millionaire.”

“We need to fix this and at least say, ‘No, you can’t trade. You can’t give advice to anybody on trades. And if you get caught, you’re going to prison,'” Esrati continued.

The candidate was responding to questions and comments from viewers, one of which suggested Biden had amassed his fortune by taking “kickbacks from Hunter’s dirty dealings.”

“Hunter’s not smart enough to do dealings to make that kind of money,” Esrati replied. “He had the houses before — when Hunter was still just a regular old dope fiend.”

Esrati is speaking to voters through livestreams on his YouTube channel daily at 4 p.m. EST.

Born in Celina, Ohio, Esrati served in the Army from 1981 to 1987. His campaign website states that his top priorities if elected will be election reform and regulating politicians.

“There are all sorts of problems caused by our broken election system: gerrymandering, polarization, and a complete lack of voter confidence,” his campaign website says. “We can solve these issues with election systems such as ranked-choice voting. We also need to rid ourselves of any electoral systems that favor ‘major’ parties over third-parties and independents.”

One of his proposals for regulating politicians includes forcing them to retire by the time they reach 70 years old.

“Our current politicians want to regulate all sorts of things but don’t seem to think any rules ought to apply to them,” the website says. “Politics is about the future, not the past. Politicians should have a mandatory retirement age of 70. We should also regulate their donations by creating a donor registration system that handles the money and record keeping. Politicians should also be forbidden from owning stock in any company that has a government contract/grant or has applied for a government contract/grant.”

The candidate is running in a red district against ten-term incumbent Congressman Mike Turner.

Editor’s Note: the headline of this article was updated shortly after publishing to include a bit about his policy positions. 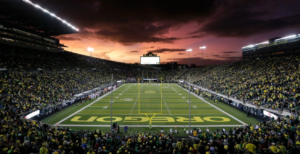 University of Oregon Apologies for Anti-LDS Chants at Football Game