Washington, D.C.’s mayor has ordered an American flag with an extra star be flown for Flag Day.

The nation’s capitol has lobbied for statehood for years with no success.

Mayor Muriel Bowser said displaying the modified flag on the June 14 holiday is a “reminder to Congress and the nation that the 700,000 tax-paying American citizens living in Washington, D.C. demand to be recognized.”

“On Flag Day, we celebrate American ideals, American history, and American liberty. But the very foundation of those ideals, and the basis for our liberty, is representation,” Bowser wrote in her June 13 order. “DC’s disenfranchisement is a stain on American democracy – a 220-year-old wrong that demands to be righted.”

Bowser alluded to the expected overturn of Roe v. Wade as well as gun reform while discussing the importance of her district’s statehood.

“We are at an inflection point for American democracy, and it is within the Senate’s power to do the right thing, embrace representation, and move DC statehood forward to the President’s desk,” the mayor concluded.

If granted statehood, D.C. would have 30 days to begin the election process for two senators and one member of the House of Representatives.

“The State shall have and retain title to, or jurisdiction over, for purposes of administration and maintenance, all real and personal property with respect to which the District of Columbia holds title or jurisdiction for such purposes on the day before the date of the admission of the State into the Union,” the bill notes.

Those in favor of D.C. statehood have argued its residents pay more taxes than 22 states in the union but have no representation on a federal level. The district’s judges are selected by the president and the senate and the city’s police force is part of the Department of Justice.

But because the city is predominately made up of Democrats, granting it three federal representatives could give the Democratic Party an advantage over Republicans.

“Statehood would be a unilateral gift to Democrats in a Senate that is at the moment evenly divided and a House that is within reach for the GOP next year,” Time reported in March of 2022. “In the Capitol that just advanced a popular pandemic-relief package approaching $2 trillion without a single Republican vote, it’s unimaginable that 10 GOP Senators who would unilaterally give their opposition more power, no matter the moral arguments.”

The Senate has yet to vote on the bill and it is largely not expected to back the city’s bid for statehood.

Flag Day is a good reminder that no American loses anything by adding a star.

Share your pics today of your 51 star flag or DC flag with #DCStatehood pic.twitter.com/uvRCCIlIlZ 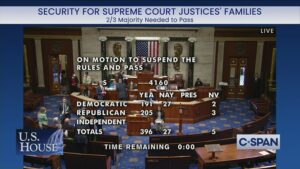