Danny Meyer’s Restaurants Will Require Proof of Vaccination in D.C. and N.Y.C.

Those who want to dine inside at a Union Square Hospitality group restaurant will need to their vaccination cards.

Union Square Hospitality Group will require proof of vaccinations for indoor diners at any of its restaurants in New York City or Washington, D.C.

Chief Executive Officer Danny Meyer announced the policy on behalf of the restaurant group today in an interview with CNBC.

“We feel like we’ve got an amazing responsibility to keep our staff members and our guests safe, and that’s what we’re going to do,” Meyer said. He added, “The vast majority of people who dine out, especially indoors, don’t want to see us go back to how things were … We know right now that the vaccine works, and it’s time to make sure that this economy continues to move forward. There’s no going back.”

On the Union Square Hospitality website, the company says guests will need to show proof that they are fully vaccinated beginning on September 7th. Proof of vaccination could be a physical Covid-19 vaccine card, a New York State Excelsior Pass, a relevant state-provided vaccine pass, or a photo of a vaccination card.

The company already required that all team members be fully vaccinated. Per The New York Post, Meyers says “the company offered eight hours of pay per Covid shot. He added that employees who haven’t yet gotten the shot have 45 days to do so.”

Mayor Bill de Blasio’s press secretary, Bill Neidhardt, tweeted that the policy had the “full backing of the NYC government.”

BIG: Restauranteur and NYCEDC Chair Danny Meyer just announced a vaccine mandate for staff and customers at his restaurants.

A bold move supported and encouraged by @NYCMayor, with the full backing of the NYC government. This is the path forward. pic.twitter.com/nTRBnVcefa

According to Bloomberg, “Meyer has acted on the side of caution throughout the pandemic.” The publication said he “proactively” decided to “shut down his 19 New York restaurants as a result of the pandemic” on March 13, 2020. The restauranter told Bloomberg this year that he didn’t anticipate re-opening his dining rooms until there was a COVID-19 vaccination.

The Washingtonian described the restaurateur as a “much-watched industry trendsetter [and] leader in the ‘hospitality included’ movement.” He later reinstated tipping following varied results.

Regarding the decision to require proof of vaccination, Meyers said, “This is the most logical thing I’ve ever seen.”

Meyer is popularly known for founding Shake Shack. The fast-casual burger chain is not a part of USHG and will not require proof of vaccination at this time.

The announcement comes amid debate over the legality of so-called vaccine passports just days after the CDC recommended everyone — including the vaccinated — should wear masks inside in places experiencing a spike in COVID-19 cases. 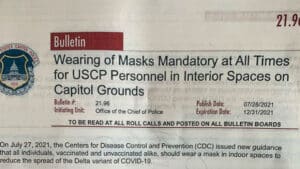