The person appears to be in pain while holding their stomach asking, “Why?”

“Only women have uteruses and only women can menstruate,” said Libs of TikTok.

Only women have uteruses and only women can menstruate. pic.twitter.com/FkQPZoi2O1

A pride flag with a transgender pride variant is seen in the background as the person holds what appears to be a heating pad to their stomach while adjusting their skirt. The transgender-identifying person proceeds to question why the pad wasn’t hot enough.

“I swear to God if someone says ‘welcome to womanhood,’ I’m going to lose my s—,” says the transgender identifying person.

One user noted uterine contractions were caused by the release of prostaglandins.

“That person has NO uterus, NO Fallopian tubes, No eggs, NO female hormones that trigger menstruation,” said the user.

“This is woke misogyny,” said Timcast and Post Millennial contributor Olivia Rondeau. “A male mocking a woman’s pain by pretending to have it just cause he put on makeup. Faker!”

“Notice the slight smirk as he leans on the bed — he knows he is mocking women and NO we don’t have to tolerate this insult,” said another user.

Another user sympathetic to the transgender-identifying person said, “I am unsure why you [Libs of TikTok] can’t just leave people alone. If they are adults, [doing] their own thing, harming no one, why do you care? There must be more positive & constructive things do do [sic] with
your time.”
“Painting your skin a different color as a joke is deeply offensive but a man seriously pretending like he’s a woman getting her period is normal and brave and progressive!” said another user.
TikTok influencer Dylan Mulvaney, who also identifies as a transgender woman, had previously been criticized for suggesting “not all women have periods” in September 2020.
“Also a fact: Not all people with periods are women. Let’s celebrate the diversity of all people who bleed!” Mulvaney said at the time.
In March, feminine hygiene brand Tampax reportedly collaborated with the TikTok influencer after Mulvaney shared a video explaining Mulvaney’s decision to purchase and carry tampons for other women.

“I have never made $1 off of feminine hygiene products,” Mulvaney said in a December video clarifying the TikTok influencer was only sent “a few boxes of tampons” by the brand to give other women following criticism.

“So I hope that helps you sleep better at night,” Mulvaney continued, saying the “bigger problem” was women feeling the TikTok influencer was a “threat” to their “womanhood.” 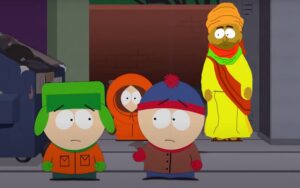