New Mexico county commissioner and founder of the group “Cowboys for Trump” is being removed from office after a lawsuit alleged that he was disqualified for his participation in the Capitol protest on January 6, 2021.

A judge ruled on September 6 that Otero County Commissioner Couy Griffin must be removed from office “effective immediately.”

Griffin was convicted of breaching and occupying restricted Capitol grounds, a misdemeanor, in March.

In June he was sentenced to 14 days in jail, a $3,000 fine, 60 hours of community service, and a year of supervised release.

The lawsuit seeking his removal from office cited Section 3 of the 14th Amendment, also known as the Disqualification Clause, which prohibits any person who took an “oath…to support the Constitution of the United States” then “engaged in insurrection or rebellion” from holding office.

The clause reads in full: “No person shall be a Senator or Representative in Congress, or elector of President and Vice-President, or hold any office, civil or military, under the United States, or under any state, who, having previously taken an oath, as a member of Congress, or as an officer of the United States, or as a member of any State legislature, or as an executive or judicial officer of any State, to support the Constitution of the United States, shall have engaged in insurrection or rebellion against the same, or given aid or comfort to the enemies thereof.”

The clause has not been used to remove someone from office since 1869.

The ruling also marks the first time that a court has found that the protest on January 6 was an “insurrection.”

Citizens for Responsibility and Ethics in Washington (CREW), and several New Mexico-based law firms, had filed the lawsuit on behalf of a group of New Mexico residents.

In a press release about the ruling, CREW said that under New Mexico law, any private citizen may file a lawsuit to try and remove a county official from office.

“This is a historic win for accountability for the January 6th insurrection and the efforts to disrupt the peaceful transfer of power in the United States. Protecting American democracy means ensuring those who violate their oaths to the Constitution are held responsible,” said CREW President Noah Bookbinder. “This decision makes clear that any current or former public officials who took an oath to defend the U.S. Constitution and then participated in the January 6th insurrection can and will be removed and barred from government service for their actions.”

Griffin is now barred from holding public office in the future.

“January 6, 2021, was a dark day in our history. The court’s ruling today is a historic moment for our country. Mr. Griffin’s removal and bar from holding office again is a step towards obtaining justice and restoring the rule of law,” said Dodd Law Office, LLC President Christopher Dodd.

Griffin had not publicly commented on the ruling at time of publishing. Timcast has reached out to him for comment and will update this story if one is provided. 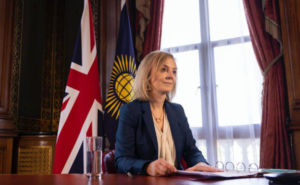