Retailers are expecting to see a rise in clothing prices

Cotton is at its highest price since July of 2011.

The surge in costs is expected to add to the complications already facing retailers.

“Cotton prices surged to a 10-year high on Friday, reaching $1.16 per pound and touching levels not seen since July 7, 2011,” reports CNBC. “The price of the commodity rose roughly 6% this week, and is up 47% year to date. Analysts note that gains are being intensified further from traders rushing to cover their short positions.”

Retailers, like denim brand Levi Strauss, are preparing to adjust to the industry change including a possible loss of profits.

“In 2011, we needed a prayer meeting,” Levi Strauss Chief Executive Chip Bergh told investors on an earnings call Wednesday. “It’s a very different situation today. We’ve been able to take pricing over the last 12 months and it’s sticking. … We priced ahead of some of these inflationary pressures hitting us.”

On the same call, Chief Financial Officer Harmit Singh said every pair of jeans contains about two pounds of cotton — accounting for about 20% of the production cost of a pair of the brand’s jeans.

According to PYMNTS.com, “Last December, the U.S. barred companies from importing cotton and other cotton products from China’s Western Xinjiang region over concerns that it was being produced using forced labor by the Uyghur ethnic group. This forces Chinese companies to buy cotton from the U.S., manufacture goods in China and then sell it back to the U.S.”

The United States is one of the the biggest exporters of cotton in the world. However, the nation’s cotton crops have also struggled under a wave of extreme weather, including droughts and heatwaves.

India, another major cotton exporter, restricted its shipments to aid its domestic partners.

In 2020, Texas was the nation’s reading cotton producer, reportedly harvesting 4,748 bales. Georgia, the second largest producer, harvested 2,180 bales and Arkansas harvested 1,300 bales. In total, the United States produced 14.9 million in 2020, a decrease from the 19.9 million bales produced in 2019. Statista noted that “compared to other crops like genetically modified corn and soybeans, the acreage of genetically modified cotton is relatively low in the United States.”

Data from the U.S. Bureau of Labor Statistics indicated that clothing prices rose by 4.3% in August compared to the same time last year. 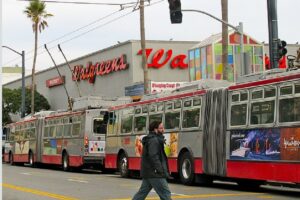