Democrat Connecticut State Rep. Kevin Ryan has introduced a bill to allow 12-year-old children to get vaccinated without parental consent.

The bill was referred to the state legislature’s Joint Committee on Public Health on Tuesday.

“Be it enacted by the Senate and House of Representatives in General Assembly convened: That the general statutes be amended to allow a child twelve years of age or older to receive a vaccination with the consent of such child’s parent or guardian,” the measure states.

The bill does not specify that it applies only to the COVID vaccine, leaving it open to apply to other childhood vaccinations.

Currently, children in the state who are under 18 years old need a parent or guardian’s permission to be vaccinated.

“It’s a road that Connecticut keeps trying to push, the Democrats keep pushing this issue and I think it’s really important to have parents involved in their child’s lives so I find the proposal very disturbing,” Rep. Candelora told local station WFSB.

Rep. Ryan told the station that he introduced the bill on behalf of a constituent and said that “as their representative, it’s my duty to express their requests and ensure their concerns have been taken seriously, especially on a health care issue.”

“I feel like if you touch my children, you most definitely need permission,” Connecticut parent Tymeir Williams told the local NBC News affiliate.

“Kids who are 12 have no business making a decision whether it’s a vaccination or any other health-related thing,” another parent, Maribeth Marchi, said.

Other parents told the station that they support the proposed legislation.

“I think it’s good for kids to have that option if their parents are against it,” said Brenna Zysk, of Windsor.

Washington, DC, passed a law in 2021 that allows children as young as 11 to be vaccinated without parental consent “if the minor is capable of meeting the informed consent standard and the vaccination is recommended by the United States Advisory Committee on Immunization Practices.”

The Public Health Committee will determine if the Connecticut bill goes up for a vote. 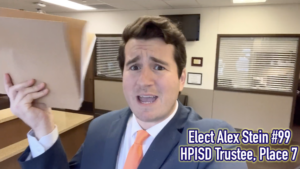 'Get Ready To Work!': Alex Stein Will Run For Texas School Board