Arizona Congressman Paul Gosar is pushing for illicitly manufactured fentanyl to be considered a weapon of mass destruction by the federal government.

Colorado Congresswoman Lauren Boebert introduced House Resolution 8030, also known as the Fentanyl is WMD Act, on June 13. The classification would require the Department of Homeland Security to treat the systematic opioid as a weapon of mass destruction and allow additional agencies to make a coordinated effort to prevent the illegal sale and distribution of fentanyl.

Gosar wrote in a statement on Gab that he supports Boebert’s efforts.

“Fentanyl is the leading cause of death for Americans aged 18 to 45. According to the CDC, drug overdoses have killed about 1 million Americans since 1999. Last year, Border Patrol seized enough fentanyl to kill every American several times over,” the congressman said on July 31.

“One American dies of fentanyl every eight-and-a-half minutes,” Gosar said. “The fentanyl is coming from China through Biden’s open border. These tragic deaths are 100% preventable.”

“We have to secure our southern border, and we have to do it as soon as possible — the lives of countless Americans depend on it,” he concluded.

The United States does permit the prescription use of pharmaceutical fentanyl for the treatment of extreme pain after surgery.

However, illicitly produced fentanyl comes in powder and liquid forms and is extremely potent and therefore less expensive. Fentanyl has a similar effect to heroin but is 50 times stronger.

The onset of the opioid epidemic in America and the abuse of prescription pain pills morphed into widespread heroin addiction. Fentanyl ultimately became mixed into the heroin supply, causing an increase in overdose deaths.

“The illicit fentanyl is so potent, you can poison a population with a very small amount…It’s all building on itself,” sociologist Steven Kurtz said in a report published by Nova Southeastern University. Kurtz is the director of NSU’s Center for Applied Research on Substance Use and Health Disparities and has advocated for more primary prevention and awareness.

The Center for Disease Control and Prevention described fentanyl as “more powerful, more addictive, and more dangerous” than other drugs because of its extreme potency.

“Drugs may contain deadly levels of fentanyl, and you wouldn’t be able to see it, taste it, or smell it,” the agency reports. “It is nearly impossible to tell if drugs have been laced with fentanyl unless you test your drugs with fentanyl test strips.”

More than 150 people die every day from an overdose linked to illicitly produced fentanyl.

Moody noted that more than 100,000 Americans have died from drug overdoses — roughly twice as many Americans who died during the Vietnam War.

“Fentanyl has become the leading cause of death among adults ages 18-45, claiming more young lives than COVID-19, cancer, car accident, and suicides,” Moody wrote. “In the nearly two years that your administration has been in office, you have done little to abate this American tragedy.”

Like Gosar, Moody said that Biden’s policies pertaining to security at the southern border are insufficient to stop the steady trafficking of fentanyl.

Customs and Border Patrol reported in January that it had seized 839 pounds of fentanyl – significantly more than the 682 pounds seized during the entire 2021 fiscal year and six times more than the 2019 fiscal year’s 139 pounds.

“Overall illegal narcotic seizures decreased, though there was a substantial increase of fentanyl interdictions,” said CBP Commissioner Chris Magnus in a statement, per Fox News.

On June 9, CBP officers incepted a package with allegedly $330,000 worth of fentanyl on the Hidalgo International Bridge.

“Our CBP officers use all available tools and resources to identify and extract narcotics with caution,” said Carlos Rodriguez, the Port Director for the Hidalgo/Pharr/Anzalduas Port of Entry, in a statement. “It is vital to the safety of our officers that we be able to identify what type of narcotic we are dealing with, as a small amount of fentanyl can be fatal.” 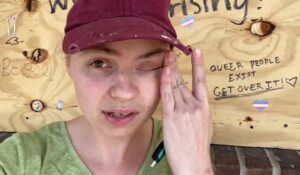