House Minority Leader Kevin McCarthy (R-Calif.) is facing strong headwinds in a potential bid to become Speaker of the House of Representatives.

Nationwide, Republicans who say they are fed up with career, “business as usual” politicians, long considered establishment favorites, want to throw their support behind candidates for Speaker who are viewed as less amenable to interests within the D.C. Beltway.

It’s time for House Republicans to organize a movement to block Kevin McCarthy as Speaker. The Dems will vote against him, so if enough Republicans hold out, he can’t get there. No more business as usual with self-serving opportunists!

McCarthy has made enemies with some Republicans who believe he was unable or unwilling to mount a tougher fight over the past two years against Democrat House Speaker Nancy Pelosi and Senate Majority Leader Chuck Schumer.

Good also says that McCarty has failed to support conservative agenda items like requiring a recorded vote on legislation, attempting to remove Pelosi as Speaker, and blocking the 2023 National Defense Authorization Act (NDAA).

Members of the conservative House Freedom Caucus — who are threatening to keep McCarthy from the Speakership — have drafted a list of demands.

Rep. Andy Biggs (R-Ariz.) expressed concern about McCarthy’s reversal on his willingness to initiate impeachment proceedings on President Joe Biden or other officials within his administration.

“I’ve heard from multiple of my constituents who question the wisdom of proceeding forward with that leadership,” Biggs said.

In an op-ed published three days after the midterms, Jordan Schachtel excoriated McCarthy, drawing from the anger expressed by members of the Republican Party.

“Mitch McConnell and Kevin McCarthy are bought and paid for assets for a variety of interests, none of which represent protecting the individual freedoms of Americans,” he writes.

“McCarthy, who has never held a real job, has spent his entire post-college life in politics,” Schachtel added. “In other words, he has been working his entire life to accumulate power.”

McCarthy will likely need almost every single Republican vote in order to become Speaker. Good believes that McCarthy does not have the votes to win.

Rep. Chip Roy (R-Texas), who has not yet decided who he will support for Speaker, also reiterated, “No one currently has 218 votes.” 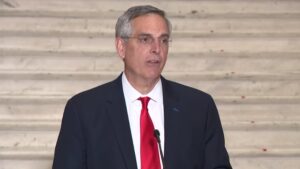 Georgia Secretary of State Selects His Own Race For Election Audit