As part of a deal to pass this year’s National Defense Authorization Act (NDAA), Democrats and Republicans in congress have reached a compromise that will repeal the military’s COVID-19 vaccine mandate.

The annual funding bill is up for a vote this week and comes amid threats from House Minority Leader Kevin McCarthy (R-CA) to withhold military funding if the mandate isn’t scrapped.

“I told the President, I was very clear from the very beginning,” McCarthy said. “If he wants the NDAA, you have got to lift the vaccinate mandate on our military men and women. Why? They are not meeting the recruitment goals right now because of this. People are leaving.”

A general in the Marine Corps has also warned that the mandate, imposed by Defense Secretary Lloyd Austin in August of 2021, is a major factor in the military’s declining recruitment.

“Where it is having an impact for sure is on recruiting, where in parts of the country there’s still myths and misbeliefs about the back story behind it,” Gen. David Berger said at a panel at the Reagan National Defense Forum, according to Military.com.

U.S. Senator Marsha Blackburn (R-Tenn.) addressed the issue in a Nov. speech defending amendments that she introduced into the 2023 NDAA to remove the vaccine mandates for service personnel.

“Prospects are looking bleak for Guardsmembers with legitimate exemption claims—and for the military as a whole. The National Guard is already missing recruitment goals, and they’re set to lose 9,000 members in Fiscal Year 2023 and 5,000 in Fiscal Year 2024,” she said.

“I introduced two amendments to the 2023 NDAA that would have injected sanity into these vaccination requirements: The first would have prohibited involuntary separation of any servicemember for refusing the COVID-19 vaccine until each Service achieves its end strength authorized by last year’s NDAA,” she said. “The second would have made sure that members of the National Guard or Reserve maintain access to pay and benefits while their request for a religious or health accommodation was pending.”

She added, “This is about as noncontroversial as you can get on the issue of vaccine mandates. These amendments would create a simple rule to stop the Biden DoD from railroading their own troops.”

On Dec. 6., Austin told reporters that there is no hard data indicating the mandate is impacting recruitment.

Republicans have issued strong objections to the vaccine mandate since it was instituted last year. As of this summer, tens of thousands of military personnel faced potential discharge for failure to comply with the policy.

Democrats acknowledge that part of the reason they were willing to compromise is that attitudes surrounding the vaccines have shifted.

“The politics on that have changed,” said Rep. Marc Veasey (D-Texas), a member of the Armed Services panel. “If this were 2020, it would be a different story.” 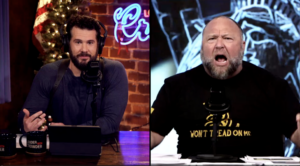