While political street art is common in the district, it is fairly unusual to see it take aim at Democrats as the area is extremely blue.

“Somebody put up this incredible street art in DC over night. Knowing DC it’ll be ripped down within hours. All must comply! If you know the artist drop it in the replies!” Wolf tweeted.

ANNND some lady is already out here ripping down the “dangerous propaganda.” 🤣 pic.twitter.com/xrEYHl4poq

His tweet quickly proved correct, as he filmed a woman tearing down the posters as he was still there taking photographs.

Here’s all of them in one photo. pic.twitter.com/DSOHYcfP6V

“Can I ask you why you’re tearing them down?” Wolf asks the woman. “Should all art comply? I mean I don’t understand is it affecting anyone for them to be up?”

“Yes, it’s a public health concern,” the woman says in the video. “It’s alarmism. It is dangerous propaganda … I live in the neighborhood. This is bullsh-t.”

The Washington Examiner reports that posters were also spotted in Glover Park, near the intersection of Calvert St. and Wisconsin Ave.

In one of the posters, Biden is depicted holding a gavel labeled “OSHA” with “comply” written on the side. Another features the president surrounded by masked children and vaccines with the phrase, “Good kids are compliant kids.”

In a poster featuring Fauci, the doctor is seen in a black cloak holding a vaccine with the words “trust the scientism.”

No artist has taken credit for the posters by time of publishing. 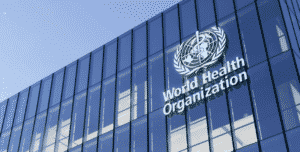