Comedian and ‘Saturday Night Live’ star Jim Breuer is canceling his concerts at venues across the United States that require proof of vaccination before entry, becoming the latest celebrity to protest so-called “vaccine passports” in cities like New York.

“Two quick updates on shows that you may think you may be getting tickets to or you already have tickets to: The Wellmont Theater in New Jersey — not doing it,” Breuer said on a Facebook Live Video.

“Also the Royal Oak Theater in Michigan, due to the segregation of them forcing people to show up with vaccinations … I am also not doing those shows,” added the 54-year-old comic. “I know I’m going to sacrifice a lot of money, but I’m not going to be enslaved to the system or money.”

“My plan will extend the vaccination requirements that I previously issued in the health care field. Already, I’ve announced we’ll be requiring vaccinations that all nursing home workers who treat patients on Medicare and Medicaid, because I have that federal authority,” said Biden Thursday night.

“Today, in total, the vaccine requirements in my plan will affect about 100 million Americans — two-thirds of all workers. And for other sectors, I issue this appeal: To those of you running large entertainment venues from sports arenas to concert venues to movie theaters, please require folks to get vaccinated or show a negative test as a condition of entry.,” he added.

“My message to unvaccinated Americans is this: What more is there to wait for? What more do you need to see? We’ve made vaccinations free, safe and convenient. The vaccine is F.D.A. approved. Over 200 million Americans have gotten at least one shot. We’ve been patient, but our patience is wearing thin. And your refusal has cost all of us,” concluded the Commander-in-Chief. 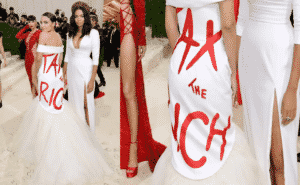 AOC Wears ‘Tax The Rich’ Dress to The Met Gala