A Colorado school district has instructed teachers not to let parents know if their child is exhibiting signs of “gender confusion.”

The Jefferson County Public School district, which is the second largest in the state, sent out a “Toolkit for Supporting Transgender & Gender Expansive/Nonconforming Students” to their teachers.

The toolkit, obtained by the Daily Wire, included a picture of the “gender unicorn,” which claims that there is a difference between “gender identity,” “gender expression,” “sex assigned at birth,” and whom people are both physically and emotionally attracted to.

The graphic instructs teachers to visit a website, transstudent.org, for more information.

“One Jeffco parent reached out to The Daily Wire concerned that the school would not inform parents if their child is over the age of 11. According to school guidance, if a child in secondary school uses a different name, gender, or is using different pronouns at school, teachers are not required to inform the parents,” the Daily Wire report explains. “According to the toolkit, elementary school teachers are told to inform parents about persistent gender dysphoria.”

For students in elementary school, the guide says that parents should be informed. However, that guidance changes for students in middle and high school.

“In some cases, notifying parents/guardians carries risks for the student, such as being kicked out of the home,” the guide reads. “Prior to notification of any parent/guardian or guardian regarding the transition process, school staff should work closely with the student to assess the degree, if any, the parent/guardian will be involved in the process and must consider the health, well-being, and safety of the student in transition.”

The website tells teachers that “each arrow on the chart is a “sliding scale, not a checkbox.”

“Many people were curious if agender and asexual people were included in this graphic. In short, they are. For example, identifying on the left of the sexuality spectra would indicate no attraction. Each arrow is a sliding scale, not a checkbox,” the website says. 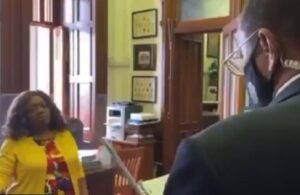