Professor Natalie Gosnell claims that there is a division between art and science that is rooted in “the systemic racism and sexism that the physics institution has been born into, which limits what physics could be and limits the people who feel welcome practicing it,” according to a report from the Colorado College News.

“As an astrophysicist, I’m a product of institutions that are steeped in systemic racism and white supremacy,” Gosnell said. “The tenets of white supremacy that show up [in physics] of individualism and exceptionalism and perfectionism… it’s either-or thinking, and there’s no subtlety, there’s no gray area. All of this manifests in the way that we think about our research, and what counts as good research, what counts as important research?”

The professor claims that the world of astrophysics is “hyper-masculine,” but she wants to change that.

As part of her crusade to create a more inclusive field of astrophysics, Gosnell created an immersive art piece called “The Gift.” The Colorado College News reports that it is “experienced in a room with audial and visual stimuli, and through a book about an astrophysical phenomenon of a dying star as seen through the eyes of Gosnell and her co-creators, Janani Balasubramanian and Andrew Kircher.”

Gosnell explained that the mass-transfer process is often described with a “violent, hyper-masculine lens” because the mass-receiving star has received nicknames like the “vampire star” and “cannibal star.” She told the college paper that they are viewed as the “bad boys” of the universe.

“I think because science and art have been so separated, and there’s […] systemic issues within science, the metaphors that are often chosen [to discuss science] are very violent and hyper-masculine,” she says.

The article sought to back up Gosnell’s claims by saying that “the exclusive environment of physics is well-documented: research published at the American Institute of Physics, the American Physical Society, and other reputable physics publications has spotted a trend that most of us could already guess — white men, across the board, tend to have the strongest sense of belonging in physics. Persons of color and women’s involvement and success in physics is markedly low.” 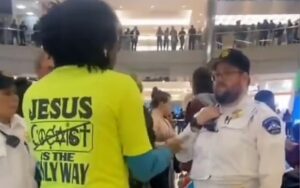