A one-time contestant on American Idol announced his bid for Congress and said he wants to change some of North Carolina’s “backward ass policies.”

Clay Aiken was the runner-up on season two of the singing show competition, which aired in 2003.

“For decades, North Carolina was actually the progressive beacon in the South. But then things changed, and the progressives lost power, and we started getting backwards ass policies, like the voter suppression bills and the bigoted bathroom bill,” Aiken said in his campaign video released on Jan. 10.

Can you believe it's been almost 20 years since I first got to share my voice with you? That's a long time. A LOT has changed!

We need powerful voices more than ever, so I'm running for Congress.

This is the singer and former teacher’s second Congressional campaign. He ran for the 2nd Congressional District in 2014 but eventually conceded to Republican incumbent Representative Renee Ellmers. He ultimately lost by 17 percentage points.

On his website, he said “North Carolinians are worried about affordable health care and rapid inflation. They are worried about their retirement savings and are frustrated by crowded interstates and infrastructure that hasn’t kept up with our rapid growth.”

“We, as levelheaded, open-minded and compassionate Democrats, we have always been the party of All Americans,” Aiken said in his announcement. “We have always been the big tent and we’ve got to continue to be that, because from stopping climate change and systemic racism and income inequality and gun violence to securing voting rights and free healthcare and a woman’s right to choose, we are the ones who are gonna solve the country’s biggest problems.”

The Raleigh-native said that his home state was once a “progressive beacon of the south.”

He said that the state’s “loudest voices” are now “white nationalist” and showed a video of Republican Representative Madison Cawthorn speaking at the Jan. 6  “stop the Steal” rally.

“These folks are taking up all the oxygen in the room and I’ve got to tell you, I am sick of it,” Aiken said. “As Democrats, we have got to get better about speaking up and using our voices, because those folks ain’t quieting down anytime soon​.” 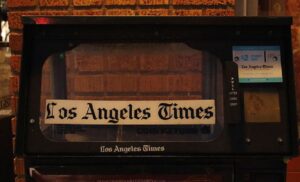