Republican State Senator Darren Bailey and his wife, Cindy, were in attendance at the protest.

“We have all been appalled by some of Springfield’s extreme and evil legislation, but just when we thought it couldn’t get worse…they are going to allow a satanic display in YOUR rotunda at the Capitol,” Bailey, who is running for governor, wrote in a Facebook post. “Their evil, satanic display of the ‘Baby Baphomet’ meant to mock the millions of Christians in Illinois is vile and has no place in our State Capitol.”

In a press release about the controversial statue, the Satanic Temple said that it is in celebration of Sol Invictus, which takes place on December 25, the same day as Christmas.

“The new display, created by artist Chris P. Andres, depicts the Satanic deity Baphomet as a swaddling babe,” the Satanic Temple said in their statement.

The sculpture was set up next to a nativity scene installed by the Diocese of Springfield in Illinois.

The Daily Wire reports, “the American Society for the Defense of Tradition, Family and Property kneeled and recited the rosary and displayed signs that read ‘Satan Has No Rights’ and ‘Begone, Satan’ next to the Nativity scene.”

“This year’s tradition marks a greater urgency in the Baphomet’s message of harmony and reconciliation,” noted The Satanic Temple’s Director of Campaign Operations Erin Helian in the press release.

According to a report from the State Journal-Register, Paprocki said that satanic displays “should have no place in this Capitol or any other place.”

“Mocking the millions of Christians in the state of Illinois and billions around the world by depicting the baby Jesus this Christmas with the ‘satanic deity’ Baphomet is the very definition of evil and causing division, but that is to be expected from an organization that is in existence to troll people of faith,” said Andrew Hansen, a spokesperson for the diocese, according to their report.

The Satanic Temple recently filed a lawsuit in Texas claiming that the the Heartbeat Act law violates their “religious freedom” to perform “abortion rituals.” 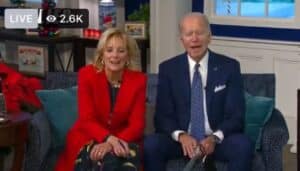